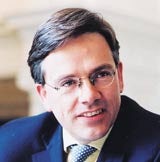 Hammond has been with Whitbread since 2001, most recently as corporate development director, charged with seeking new business opportunities and taking the David Lloyd Leisure brand to Spain.

He joined Whitbread in 2001 from Unilever, where he was senior vice-president for laundry care, Europe. A veteran Lever Brothers marketer, Hammond was Lever’s fabrics marketing director during the fierce wrangling with Procter &amp; Gamble over Unilever’s Persil Power in 1994.

Persil Power’s manganese cleaning agent was accused of rotting clothes and the brand was eventually axed. Hammond was promoted to managing director of Lever Bros in Egypt shortly after the debacle (MW November 17, 1995).

At TGI Friday’s, Hammond replaces Guy Parsons, who is to become sales and marketing director of low-cost hotel chain Travelodge in October.

TGI Friday’s long-serving marketing director is Joe Boyle and the chain’s ad account is held by Heresy. The company spent £428,000 on advertising in the year to March (Nielsen Media Research).

Sportswear company Fila is repositioning itself as a premium fashion-led brand in a bid to raise awareness of its products and to increase market share. It plans to relaunch in the UK later this year. The move is being led by Fila’s US and Italian teams, and the plan has been developed in a series […]