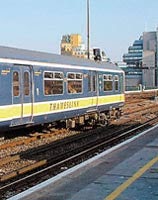 Thameslink faces up to 24 months of disruption as work on the Channel Tunnel link to St Pancras is undertaken. The company wants to launch a campaign that will keep passengers informed of the closure periods, what alternative routes are available into London and how work is progressing.

Thameslink commercial manager Peter Robinson will oversee the appointment with the help of The Haystack Group. He is looking for an agency with advertising, direct marketing, PR and new media skills.

Thameslink’s advertising agency of record is Maidenhead-based Guerilla, while Oasis works on new media. Both can pitch for the business. The JDA Group works on Thameslink’s media planning and buying.

Thameslink operates in areas of Bedfordshire, Hertfordshire, London, Surrey and Sussex. The disruption on the service begins in July and will last until May 2004. Central London Thameslink stations will close from 9pm until 5am, meaning southbound trains will terminate at Kings Cross and northbound trains at Blackfriars.

The next stage of work begins in July 2004, when there will be no trains through central London for six months with southbound trains terminating at St Pancras and northbound at Kings Cross.

The train operator is owned by GoVia and French transport group Keovis.

Nationwide has renewed its sponsorship of the Wales football team for the next four seasons.

Gola, the sportswear brand, is launching a campaign to promote its Gola Classics sports shoe range. It is the first campaign to be created for Gola by Huddersfield-based agency Junction Advertising Group, which Gola’s owner D Jacobson &amp; Sons appointed as its global agency earlier this month.

TXU Energi head of marketing Matthew Crane is to report to Powergen’s sales and marketing director Paul Parmenter following TXU’s recent takeover by Powergen. The energy company is to axe 1,000 jobs at TXU.