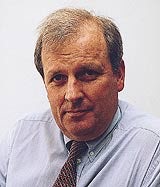 The Diary would like its readers to put their hands together for TalkSport, the UK’s only national commercial sports radio station, which – according to a statement released to the International Stock Exchange’s Regulatory News Service, quoting the latest Rajar figures – has just overtaken Virgin AM in terms of weekly reach, hours listened and market share.

Kelvin MacKenzie, chairman and chief executive of the Wireless Group, which owns TalkSport, crows: “These are fantastic results.”

But MacKenzie should not be too quick to crow. After all, there are those who question the accuracy of Rajar’s figures. Indeed, at least one radio group head is actively promoting a rival to Rajar. Just six weeks ago, he published research showing much higher levels of listening – up to six times higher for some stations – than those shown by Rajar’s diary system.

And who is this well-known industry figure, whose fulminations against the iniquities of Rajar are regularly reported in the advertising and marketing press? Step forward, Kelvin MacKenzie.

The Diary asks: can the industry ever trust research from a man who doesn’t even seem to be listening to himself?

Twentieth Century Fox Home Entertainment is backing the launch of its new Star Wars movie on video and DVD using sonic posters on JCDecaux bus shelters. The 15 sonic shelters will form part of a campaign for the launch of ‘Attack of the Clones’ and will run across the UK. The shelters will play the […]

The Blue Cross, the animal welfare charity, has appointed Tony Samuel, the deputy director of fundraising at the Royal National Institute for Deaf People (RNID), as marketing and fundraising director. Samuel has worked for the RNID for more than two years and prior to that spent a similar time at Oxfam as donor recruitment manager. […]

The majority of people think that flexible working hours are a practical idea. Despite this, however, many believe it can also hamper your career prospects