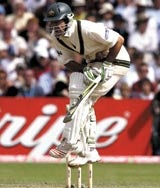 There were 40,000 people at Old Trafford on Monday, not to see Manchester United but to watch the gripping finale of the third Ashes Test of the summer.

The game ended with England agonisingly close to victory, as Australia’s last two batsmen held out for a thrilling draw, but while the team was unable to capitalise, the sport itself is experiencing a massive resurgence.

During the 1990s, things looked grimmer than Aussie captain Ricky Ponting’s countenance. English cricket languished in the doldrums as football went from strength to strength, dominating the sports pages all year round.

But that is changing as the England team stands toe to toe with Australia; the game has reclaimed its place in the nation’s affections and on the back pages.

Channel 4 has enjoyed record viewing figures during the season, with an average audience of 2.5 million throughout the last Test. The climax of the game attracted 7.7 million viewers, the channel’s highest audience for cricket and a figure that rivals that for last Friday’s Big Brother final.

BLM Sports Marketing account director Robin Clarke says that the sudden rebirth of the summer sport makes a refreshing change and believes that cricket is back for good.

He says Channel 4’s coverage has been excellent and has helped to attract new fans, while the England and Wales Cricket Board’s (ECB) work developing new competitions like the Twenty20 Cup, a short form of the game, and fostering young talent is bearing fruit.

This, combined with the team’s current success, is making the sport increasingly attractive to advertisers and sponsors. Mobile phone operator and England team sponsor Vodafone has extended its &£4m-a-year deal until 2009 and energy company npower, which sponsors home Test matches for &£3m a year, has now signed up until 2007.

If England prevails this summer, then even more money is expected to be ploughed into the game. Clarke says: “If England wins the Ashes, the ECB can name its price, as sponsorship is all about a desire to be associated with a winning team. Brands are going to look at cricket now as the way to advertise to an ABC1 audience.”

He adds that players such as Andrew Flintoff and Kevin Pietersen, England’s big-hitting pin-ups, are an added attraction for brands seeking to align themselves with the sport.

But the future is not all bright for the game, as concerns grow that the ECB may have made a mistake by signing up with BSkyB, in a &£220m four-year deal which runs from next summer and means that there will be no live Test cricket on terrestrial television.

Industry observers say the switch will cost the sport some of the popularity that it has gained this summer. Ben Wells, account director at sports marketing firm Red Mandarin, says the ECB has “missed a trick” by leaving Channel 4.

For this reason, he is more cautious about cricket’s resurgence, suggesting the hype is partially the result of a lack of other major sporting events this summer. He points to next summer’s football World Cup and says that with no live cricket on terrestrial TV, the game is unlikely to fare as well.

He says: “I would wonder how much of this is transitory, and what benefits there will be for sponsors at a lower level of competition.”

While cricket may be flavour of the month at the moment, it is still facing plenty of googlies down the line.