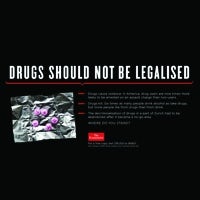 The Economist
’Drugs should not be legalised.’ This is just one of the statements written on a poster campaign that ran throughout 2010, which was designed to cause debate while people waited for a Tube. Elliot Moss, director of business development at Mishcon de Reya Solicitors highlights the campaign, which promotes The Economist magazine, as one of the standout campaigns of last year. He says: “It’s engaging and it makes me think. I’ve seen it on the Underground, I’ve seen it in print – it’s a strong campaign. They want to know what I think and it’s challenging me. That’s very smart.”

John Lewis
John Lewis is never knowingly undersold, according to its marketing, and the retailer certainly hasn’t undersold itself in terms of its advertising, according to Sally Cowdry, marketing director at O2 UK. Its “Always a Woman” campaign, which showed a female living through several key events, such as marriage and having children, has been nominated by Cowdry as the best advertising campaign of 2010. “It made me think ’wow’. The retailer tapped into a trend – in a recessionary environment people get nostalgic. John Lewis chose a brilliant way to show the brand’s heritage beautifully and stylishly,” she says.

Uniqlo
The fashion store’s Lucky Machine campaign has been given the thumbs up by Keith Grainger, chief executive at publisher Redwood. In the run-up to Uniqlo’s website relaunch in September last year, it developed a new social media initiative called Lucky Machine, a game designed to offer players the chance to win prizes and Uniqlo discounts. The game also encouraged players to invite their friends to play via Facebook or Twitter with an incentive to win more prizes. “The combination of traditional advertising channels combined with content and social can develop into amazing integrated campaigns,” says Grainger.

T-Mobile
They danced at Liverpool Street Station, they sang in Trafalgar Square and then last year they serenaded travellers arriving at Heathrow Terminal 5. The flash mobs of T-Mobile aimed to demonstrate its strapline ’life is for sharing’. The latest multi-channel ad campaign, set in London’s airport, is a favourite of Karl Gregory, managing director of Match: “Building on its flash mob successes of 2009, it’s a great case study of how a simple idea can hit viral jackpot.”

The Sun
News International used 2010 to hit back at suggestions that mobile was killing the printed newspaper industry. It ran “the UK’s best handheld campaign”, promoting the positives of having a print product that was “easy to share” with friends and “didn’t require a contract”. Reid Holland, marketing director at Hachette Filipacchi UK, “absolutely loved” the campaign, created by Glue Isobar. “It captured the moment, capitalising on the iPhone buzz. A massively successful social media strategy, ending up as an ad during The X-Factor. Brilliant.”

Costa
The British coffee brand has been uncharacteristically aggressive with its marketing, which Andrew Mullins, managing director at the Independent, Independent on Sunday and London Evening Standard, believes makes Costa a winner. In 2009/2010 it ran a poster campaign saying that seven out of ten coffee lovers prefer its coffee over rival Starbucks’. It followed this with a controversial campaign in 2010 featuring monkeys attempting to make coffee. The chain’s inaugural TV campaign aimed to demonstrate the skill that it takes to make a cup of coffee, and supported it with press activity.

These bold campaigns caught the eye of Mullins who says: “In a very competitive market, Costa attempted to drive preference through classic rational and emotional arguments in TV and print, creating a fully integrated campaign that achieved real
cut-through.”