The AA – Love that feeling?

While many brands created sentimental ads during the Covid-19 crisis, The Automobile Association provided us with some much-needed joy. In July, timed to coincide with Boris’ announcement that the nation would be coming out of the first lockdown, it introduced a new mascot – Tukker the puppet dog who reminded drivers, and pedestrians alike, of the feeling of freedom.

Created by adam&eveDDB, the ad sees Tukker reminisce on the joys of driving in his bright yellow living room, playing a song on his record player and setting up a fan to recreate the experience.

The campaign launched on social media and achieved the highest engagement of any campaign AA has run on the platform to-date. It also led to a 74% increase in positive engagement versus previous work and was the most effective brand campaign it has launched based on short-term new business sales appealing to target audiences (28% more effective than the previous brand campaign).

As an extension of the campaign, it also launched drive-in cinema events across the UK. These screenings helped to generate positive sentiment around the brand, with 96% of attendees saying they would recommend it to a friend. MF

To mark the release of flagship drama Dracula at the beginning of the year, the BBC took inspiration from the dark and mysterious Count to create an out-of-home installation that came to life as dusk falls.

By day the billboard appeared to feature a random collection of bloody wooden stakes. But as darkness descended and a spotlight was turned on it revealed the chilling shadow of Dracula himself.

Working with Havas Media, the BBC chose outdoor for its ability to build fame among youth and light TV audiences. Two sites were selected – one in London and one in Birmingham – that together helped rack up more than 320,000 impacts.

The creativity of the execution caught people’s attention, with the public response driving huge earned reach across social and publisher platforms. There were an estimated 43,000 social posts about the ad generating a reach of 22 million people.

One tweet showing a timelapse video of the billboard in action racked up more than 134,000 likes and 35,000 retweets, for example, as well as 500 comments.

Plus the campaign received heavy PR coverage with more than 40 articles written about it with exposure across both national and industry press.

To put all that into context, Havas claims to have achieved 60% of the chatter volume of the John Lewis Christmas ad but with just 0.24% of its media spend. LT

When Budweiser brought back its much loved ‘Whassup’ catchphrase earlier this year, it wasn’t just about trying to cash-in on any 1990s revival. Something of a remix of the first in what was to prove a long and hugely successful series, the ‘Quarantine Version’ overlays new audio dialogue over the original film, with the four men now “just quarantining, having a Bud” (even if using some wonderfully dated tech).

That first ad brilliantly captured something about male friendship and the blokeish way feelings are shared with the most minimal exchange of words. And, as a take on 2020’s Big Question, “is everything OK?”, this year’s version caught the mood of lockdown equally well, of a nation connecting and checking-in on friends and family.

The campaign was backed up on social with the hashtag #Togetheratadistance and the #SavePubLife initiative to help pubs forced to shut due to social distancing regulations.

Budweiser came in at number 53 in this year’s Kantar/BrandZ most valuable brands ranking. It also got a special mention in the annual list’s accompanying report as a prime example of what Kantar calls “practical creativity” during the pandemic, of finding a unique solution to the challenge of keeping a brand relevant in such testing times. MB

Direct Line – We’re on it

When Direct Line said it was getting rid of its hugely successful ‘The Fixer’ campaign in early 2020, many thought it must be an early April Fools’ Day joke. The campaign featuring Winston Wolfe had been a runaway success, helping the brand win two IPA Effectiveness gold awards and deliver significant returns for the business.

Not a company to rest on its effectiveness laurels, however, Direct Line could see an opportunity to overhaul its marketing to make it more about the brand and its ability to solve problems. And so despite the fact The Fixer was still working, it launched a new creative platform.

‘We’re on it’, created by agency Saatchi & Saatchi, aims to position Direct Line as a proactive solver of problems. To do that, it features superheroes such as Bumblebee from Transformers, Teenage Mutant Ninja Turtle Donatello and RoboCop rushing to people’s help only to find Direct Line has got there first.

As if switching creative platform isn’t a big enough job in normal times, it did so just weeks before the pandemic hit. Direct Line Group brands director Kerry Chilvers admits it was the “greatest launch plan that never saw the light of day”, with the brand forced to pivot almost immediately.

Despite needing to land a new idea quickly amid a pandemic, Chilvers says We’re On It has “surpassed expectations”, particularly the speed at which it has had an impact. She says it is already 20% more effective than The Fixer was at driving sales both in the short and long term.

There have also been “encouraging results” for its brand, with ad cut-through on track with The Fixer and resulting in increases in salience, consideration and reappraisal.

Making a change when things are going well is always difficult but Direct Line has shown that if it’s done for the right business reasons, backed up by years of learning in marketing effectiveness, it can be the right choice. Even in a pandemic. SV

The travel industry has been one of the hardest hit during the pandemic, with holidays put very much on the back burner. But rather than fade into insignificance Expedia looked to take a proactive approach that tapped into consumers’ current mood while giving them hope that holiday planning will resume next year.

‘Let’s take a trip’ shows a couple recreating holiday experiences at home in a beautifully shot stop-motion film directed by Victor Haegelin and developed with agency TeamOne. Using sheets, books, cushions and other household items the couple go on a road trip, hike up a mountain, dive into a swimming pool and enjoy room service – all the things people have missed out on as a result of Covid – all from the comfort of their living room.

Not only does the ad perfectly encapsulate the current mood, the end line, ‘Imagine the places we’ll go. Together’ offers a glimmer of optimism that things will return to normal and when they do Expedia will be there to help people plan their next trip.

As well as being a beautifully crafted film it keeps Expedia front of mind, showing both humour and creativity at a time when both are much needed.

Long and short versions of the ad have racked up nearly 20 million views on YouTube since being launched in September. LT 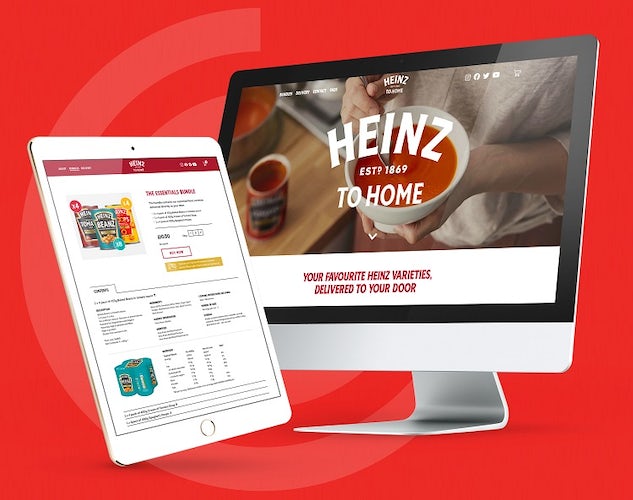 When Heinz launched its Heinz to Home direct-to-consumer offer in April it became part of a broader movement towards business models that circumvent traditional retailers.

Many of the changes wrought by the Covid-19 pandemic during 2020 accelerated movement in an existing direction of travel. The growth of direct-to-consumer (D2C) sales is an example. While there had been a gradual evolution of the channel, with some new players operating pure D2C models, 2020 saw big name brands join the party.

Heinz moved fast to meet changing demands, with the brand’s head of ecommerce for the UK and Ireland, Jean-Philippe Nier, saying: “We worked like a startup, aiming to launch a minimum viable product as quickly as possibly and improve our proposition every day from launch.”

Working with ecommerce agency, Good Growth the company created the Heinz to Home website in less than three weeks.

A limited collection of product bundles was available at launch, but this soon expanded, with themed offers for Father’s Day, and for students returning to college. Delivery was free for key workers.

According to BBH, the agency behind the campaign, Heinz to Home experienced a 200% increase in sales in Q1 of 2020, and beat its impressions target by a factor of three within 48 hours.

Lockdown may have accelerated the growth of D2C, but the hopes invested in the new Covid vaccine do not appear to be applying the brakes. MV

This 90-second spot from Ikea promotes the benefits of destressing and getting a good night’s sleep in a year when both stress and lack of sleep have been familiar problems for many.

A live-action update of the fable of the hare and the tortoise, the ad, created by agency Mother, is soundtracked by Roots Manuva. With a contemporary urban setting, it features a hoodie-wearing hare soaking up pints of ale with a crafty kebab takeout while his tortoise neighbour gets ready to face the world after a wholesome early night.

Ikea has done a lot in recent years to reposition itself as a brand beyond the usual perception as fast-furniture favourite of mainstream middle England, launching collaborations with Louis Vuitton menswear artistic director Virgil Abloh and returning to its roots as Scandi design pioneers.

The quirky eccentricity and wit of an ad like ‘The Hare’ feeds into this ongoing shift in tone and approach, even if the company has endured a tough 12 months under the global pandemic.

Sitting at number 72 in the 2020 Kantar/BrandZ most valuable brands list, Ikea’s performance this year will doubtless be badly skewed by Covid, but it’s what happens next that’s going to be truly intriguing, especially if the company is going to start planting its flag in more city centre sites. Much like the tortoise, Ikea would seem to be rested and ready for the next challenge. MB

ITV began its mental health work in 2019 with its ‘Britain Get Talking’ campaign, but it is arguably in 2020 that its message has really been needed and its impact felt.

Launched earlier than planned in a bid to use its scale and reach as a force for good during the Covid-19 pandemic, ITV turned the campaign round in just a week. A TV spot featuring Ant and Dec encouraged viewers to pick up the phone and share messages of support across social media using the hashtag #BritainGetTalking. It then showed these messages among its programming.

Alongside this was a video once again featuring Ant and Dec and aimed specifically at people on their own or feeling they do not have anyone they can talk with, highlighting available support.

The campaign is part of ITV’s wider objective to encourage 10 million people to take action and improve their mental or physical health by 2023. While 2.8 million people took part in the first campaign, this second leg has proved even more effective.

Since its return at the end of March, Britain Get Talking has led to 6.1 million people taking immediate action to text or call a friend or family member. More than 70% of UK adults have seen the campaign, with half of those who’ve seen it saying it made them feel better in general, and 37% that it made them feel more connected to family, friends and the nation at a difficult time. SV