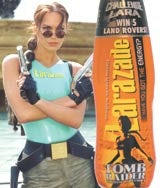 Here’s something to try at home. If your brand were a pop star, who would it be? Would it be Barry Manilow – never really changing, except for the occasional new release or tweak to the packaging to keep its loyal fanbase happy? Marmite, Worcestershire Sauce and Kinder spring to mind.

At the other end of the scale are “boy band” brands – one-hit wonders with a limited shelf-life. Maybe your brand is more of a Sean Combs, aka Puff Daddy, adopting the Post Office-Consignia route and changing its name – in Combs’ case to the more cuddly P Diddy – in an attempt to polish up a tarnished reputation.

Some brands are more like Tom Jones, ticking along with a steadily ageing customer profile before suddenly undergoing a radical transformation – Jones recording “Sex Bomb”. Lucozade, for instance, metamorphosed from old-fashioned invalid drink into trendy sports beverage. Hovis moved away from its “heritage” positioning and introduced colourful contemporary packaging. Terry’s All Gold avoided delisting by repositioning itself as a premium brand and giving itself a radical new look. Burberry changed its tone of voice profoundly by designing a bikini and enlisting the support of fashionable young things such as Kate Moss.

Some brands manage to maintain a steady stream of innovation, always staying one step ahead of customer expectations and leading, rather than following, demand. These are the Madonna brands.

Not only has Madonna updated her image with each record release, she has diversified into different product lines, with a movie career and her “Sex” book, for instance. In this way, she is like Mars, which has moved into bite-size bars, fun-size bars, drinks and ice-cream, while maintaining the strength of the original brand.

Adrian Whitefoord, partner at design consultancy Pemberton &amp; Whitefoord, suggests that all brands are having to be more like Madonna these days. He says: “Brands are thinking more of evolution, and brand values have to be more elastic. Even Coca-Cola – something of a monolith – is trying to be more responsive to consumer trends, and has introduced cherry, lemon and vanilla variants.”

He adds: “The lighter Mars is interesting. Traditionally, it was the ultimate sin to change a product’s formulation – it suggests the original wasn’t good enough. Now brands are having to be more reactive.”

Dragon Brand Consulting director Dorothy MacKenzie agrees: “The reason Madonna has been so successful is that her reinventions have been continuous, but always surprising. There is certainly a lesson for brands in that. Many brands wait until the cracks show before they change; then they worry about upsetting their existing consumers, so they don’t make the change radical enough.

“Brands need to loosen up. The successful ones are courageous enough to challenge, to be more radical than their consumers. They redefine themselves and attra

ct consumers to their new positioning, rather than asking consumers for permission to change.”

Design company SiebertHead believes that service and product brands have four key attributes and that by working out what these are, it should be possible to remain true to a brand’s values while introducing Madonna-style changes or line extensions. The values are defined as follows: product/packaging attributes – the “experience axis”; conscious and subconscious associations – the “emotional axis”; consumer associations, where a brand is known by the company it keeps – the “user axis”; and the circumstances under which a brand is used – the “usage axis”.

SiebertHead planning and development director Simon Sholl says: “Most brands rotate around one of these axes, but if they desert their key attribute they no longer offer continuity. For instance, John Lennon drifted into relative obscurity (until he was shot) because he changed from rebel leader into lonely mystic. Virgin is in danger of losing its standing since moving into Virgin Trains, because its core values – responsibility and value for ordinary people – are no longer under its control. On the other hand, Paul McCartney kept his brand intact because he stuck to what he was known for – approachability, lightness, guitar-playing and composition.

“Brands that try to reinvent – or extend – without understanding their core values often damage themselves in the process.”

Sholl cites Bic as an example. The company, known for its pens and disposable razors, diversified into perfumes, misunderstanding the core values both of Bic (quality disposables at a reasonable price) and perfume (premium, image-oriented).

On the other hand, says Sholl, Caterpillar diversified successfully from earth-moving equipment into fashion footwear, because, although the product, users and usage occasions were absolutely different, the emotional values (rugged and durable) were common to both products.

Design company Pearlfisher argues that design is a key tool for marketers in helping brands to remain current. Planning director Tess Wickstead says: “Successful reinvention is based on two key factors – truth and desire. At the heart of every brand lies a core truth that essentially remains unchanged over time. This touches a deeply held need within the consumer and anchors the brand through changes in the market. If a brand has no anchor point, consumers will view it as without substance or authenticity. At the same time, it is essential that brand-owners recognise the need to maintain the desirability of the brand, by evolution of the brand’s expression to keep pace with changing consumer desires.”

Youth brands in particular can succeed by aping Madonna’s tactics, but many mainstream products can learn from her too. However, such a fluid strategy may not be appropriate for all brands, believes John Wood, managing director of advertising agency bds beechwood.

He says: “We don’t want our Kellogg’s Corn Flakes changed every three months. The investment in Madonna is huge. When you consider the publicity she receives, in terms of column inches and airtime, she’s getting millions of pounds’ worth of exposure and publicity for reinventing herself. But newspapers won’t run two pages of editorial on Corn Flakes’ new look.”

Wood believes that three issues need to be considered before companies reinvent brands: “First, a company has to be confident that the sales generated will justify the hefty expense involved in changing packaging, advertising and so on.

“Then, you have to be sure there’s a consumer need. And finally, unlike Madonna, brands need a good reason for changing – either a new product launch, a major product change or a clear repositioning.”

What Wood is saying is that there’s nothing wrong with being Barry Manilow. But, while Corn Flakes has a fairly steady heritage, Kellogg has not sat on its laurels: over the years, it has responded to changing consumer tastes and habits by adding brands such as Crunchy Nut Corn Flakes as well as cereal bars.

Even 73-year-old Andy Williams is not content to rely on sales from his back catalogue. The easy-listening singer is attempting to tap into a new market, recording a single with TV presenter and Chicago star Denise van Outen. Managers of ageing brands should listen and learn.