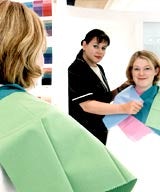 The UK health and beauty treatments market last year was worth &£870m, and Mintel’s latest research in this sector shows that the market has the potential of being worth over &£1bn by 2004 – a rise of 16 per cent.

The number of women aged between 35 and 44, who are the leading users of beauty treatments, will rise in the next few years, as will that in the 55to 64-year-old bracket, who can be targeted with images of glamourous older women.

According to the Mintel study, awareness of holistic approaches to beauty, which include alternative therapies, nutrition and general wellbeing, is on the rise.

Also, alternative therapies such as aromatherapy, reflexology, reiki, Indian head massage, acupuncture and shiatsu are now far more popular than in previous years, and a growing number of beauty salon operators are offering these services.

In addition, the National Health Service (NHS) has formally recognised that these therapies have an important role to play in patients’ wellbeing. As a result, an increasing number of GPs, medical practices and hospitals are offering or recommending aromatherapy and other alternative therapies to their patients as part of a more holistic approach to healthcare.

Consumers are also becoming interested in hi-tech approaches to health and beauty care. The Mintel report says that advances in skincare, such as anti-ageing techniques, skin rejuvenation and collagen injections are blurring the line between medical and cosmetic treatment.

Health and beauty outlets are increasingly employing State-registered health professionals (such as nurses, chiropodists and nutritionists) to offer services including laser treatment, collagen injections and blood analysis. This allows the industry to cultivate a more professional image and gives it credibility in the minds of the public.

Mintel estimates that the number of independent health and beauty salons in the UK is about 8,000. When salons located within health and fitness clubs, hotels and hairdressers are taken into account, this figure rises to approximately 11,000.

What is particularly significant about salons located in health and fitness clubs is that the clubs have memberships of consumers who are already concerned about their health and appearance. A high proportion of health club members are male, which helps to introduce more men to the health and beauty market.

And though many men might feel intimidated by traditional standalone beauty salons, health clubs are able to provide a more attractive and familiar environment.

The average annual spend per adult on health and beauty products during 2000 was still relatively low – just under &£18. But for adults who had undergone some type of health and beauty treatment in the past year, the figure was &£81, indicating that the market is far from saturated.

The highest-spending consumers (those who spent more than &£100) are likely to have used a broad range of facilities, rather than just one or two. In contrast, those who spent under &£25 tended to concentrate their expenditure on only sauna or sun-tanning treatment.

The fast pace of modern life has meant that health and relaxation treatments which help consumers unwind are increasingly popular. Between 1990 and 2000, the number of women in paid employment rose from 43.8 per cent to 46 per cent, and is expected to reach 46.3 per cent by 2005. This will no doubt have a positive impact on the health and beauty treatments market, as those females in paid employment are more likely to have disposable income to spend on such treatments. In addition, working women tend to be more concerned about being well-groomed, which is not only regarded as an essential attribute for some occupations but is often seen as an element which can help in career advancement.

The fact that consumers are likely to become more concerned about their appearance, and more determined to look good and to appear younger for longer, means that the health and beauty treatment market has a bright future. Pressure from the media, employers and other sources are likely to mean that good grooming becomes more commonplace among those in employment and those seeking career advancement.

As regularly as Halley’s comet, every few years the next effort to re-position sherry (or cognac or Scotch) appears. Each time the approach is the same. Diagnosis: lack of appeal to young people explains the perilous position of the product. Solution: change the packaging and show young people buying the product and snogging passionately, preferably […]

Tony Blair’s vision of a wired UK economy has been dealt another blow by new findings that show the UK lagging badly behind other countries in terms of broadband Internet access. The number of home Internet users with broadband connections is far behind much of Asia, Europe and the US, according to Web monitoring company […]