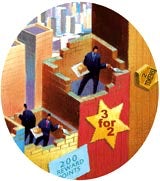 Are all sales promotion agencies playing in the same league? That is the question raised by this year’s Marketing Week Sales Promotion Agency Reputations Survey. For the third year running, there is a clear split between the scores achieved by the first ten and those of the remainder of the sector.

This year, the division is even more marked. The highest-scoring agency, IMP Group, polled double the points awarded by clients to the number ten agency, The Yellow Submarine. This outfit can be viewed both as a candidate for relegation from the premiership (since it is four points adrift of the number nine agency Marketing Drive Worldwide London) or more charitably as a recent promotion from the first division, since it outscores the number 11 agency, BDP, by four and a half points. In fact, its achievement in storming the top ten last year suggests it is on the way up.

Last year the top agency, Triangle, received about a third more votes than its nearest rival. This year, however, the scores for the top ten are much more closely grouped, which makes the gap between them and the ‘first division’ even more marked.

Moreover, the same ten agencies are present in each of the individual top tens for criteria that matter to clients, proving that their dominance is not merely a reflection of one or two strong suits. These are simply the agencies that clients believe deliver the best performance across all areas.

Among agency directors, there is a privately held view that the results in this survey do reflect a consolidation around certain key agencies. But this is not necessarily being driven by scale – the reputations of some agencies now clearly precede them by a long way.

Both Tequila Payne Stracey and Black Cat Agency have been heard of by 21 per cent of clients, but only 12 per cent have used them over the past five years. This is not as big a gap as exists between Saatchi &amp; Saatchi’s reputation (16 per cent) and the proportion of clients that have used it (four per cent). Conversely, while KLP Euro RSCG has been used by 13 per cent in that time, only 12 per cent actually recognise the name.

The gulf in scores between the top seven agencies that clients have heard of and the rest illustrates the marketing principle of “double jeopardy”. This holds that big brands attract more users through their very size, squeezing out smaller competitors. That is no doubt why the same six agencies have appeared in the top ten for the past three years.

At IMP Group, chief executive officer John Quarry believes this reflects what is happening within the discipline as a whole: “The sales promotion business is growing. It may be that more clients are taking sales promotion more seriously than they were a couple of years ago.” This finds an echo in the level at which client contact now takes place. Whereas three or four years ago brand and marketing managers used to commission agencies, Quarry says the conversation is now more often with marketing directors and even managing directors. “The overall budgets in marketing communications are expanding. Bigger companies are putting more money behind the different disciplines,” he says.

This would tend to reinforce the reputation of bigger, longer-established agencies that can match the size and seniority of those larger client organisations. Certainly at Black Cat Agency, managing director Stephen Callendar believes his company’s move into the five most respected agencies has been driven by growth.

“We now have 100 people and over the past 12 months our gross income has grown by 30 per cent. As you grow, people get to know you and they have greater awareness of what to expect,” he says. Word of mouth was ranked by clients in the survey as a key factor in learning about agencies, something that Callendar endorses.

“We have had one client since we started in 1991 who has worked with us at five different companies – she is our most loyal client. Others also move on and generate new contacts,” he says.

Significantly, clients said that seeing examples of an agency’s work was the most important way of learning about them and Callendar says having a website has dramatically improved the ability to display his company’s work.

One surprise among the factors taken into account when clients choose an agency is the low score given this year to strategic planning ability. Grouping together the scores given for “very important” and “fairly important” conceals the real story about its importance to clients.

The number of clients saying that creativity – both conceptual and execution – was very important stood at 90 per cent, while 75 per cent said account handling was very important. While strategic planning ability got an aggregate score of 86 per cent, only 22 per cent of this came from “very important” rankings – the remainder said it was just fairly important.

In some cases, strategic direction is now being set at the highest level in the company, often by external management consultancies, and is then executed by marketers in a relatively simple way. Callendar says: “We do get involved in some of that work. With fmcg [fast-moving consumer goods] clients, there does tend to be a need for things which deliver a real point of difference. Some of that involves more consultancy work.”

The claims by many sales promotion agencies to be multi-disciplinary appear to be supported by clients’ views. Just under two-thirds (65 per cent) say they also use their sales promotion agency for direct marketing, while it is striking that 56 per cent now also look to them for Internet or interactive communications.

Strategic consultancy is sought by 43 per cent, promotional advertising by 42 per cent, and customer loyalty programmes by 41 per cent. Other services used are design of point of sale (37 per cent), event marketing (31 per cent), and PR (14 per cent). This clearly demonstrates the growth in complexity of promotional marketing and the increasingly integrated nature of campaigns.

It also demonstrates that sales promotion agencies are to be found pitching against both established rivals in the direct marketing sector and newcomers in the digital arena. An interesting result this year is the arrival in the top 20 of Joshua, better known in the direct marketing arena, even though it is a member of both the Direct Marketing Association and the Institute of Sales Promotion (ISP).

According to managing director Nick Spindler, this is the fruition of the agency’s long-term positioning as an integrated player. “From the early days, long before it was in vogue, that is what we aimed for. The way we have structured the agency is to be flexible, but with specialist groups that bring their knowledge of each discipline,” he says.

Client briefs are approached from a neutral position and each skills group is drawn in as required. The idea is that best-of-breed thinking will be used for every campaign, regardless of which discipline is leading it. “If a piece of direct mail work has a promotional element, the sales promotion group will be involved because we need to understand what will get consumers to fill in a form or enter a competition,” says Spindler.

This poses the question of which trade bodies integrated agencies are answerable to. For the first time, the Sales Promotion Consultants Association (SPCA) received a higher score than the ISP as the association of choice among clients. While undoubtedly a triumph for the persistence of the agencies involved and their PR efforts on behalf of this body, it does raise an important issue.

The ISP governs professional standards in the industry, not least through the diploma course that it administers, while the SPCA is simply a self-interest group. Does this mean that client-side marketers are now less concerned about ethics, governance and professionalism than they are about self-promotion? Or is it simply that, since nobody is ever stripped of their ISP credentials, the value of membership of that institute has been eroded?

Whatever the answer, there are no signs of any slackening in the demand for agency services, nor of the money being reined in. Fees are the preferred method of remuneration, with 51 per cent of clients choosing this route, but payment © by results was named by nearly one quarter, while 21 per cent said commission. A combination of these would be preferred by 37 per cent, but mark-up is not liked, except by a very small minority – seven per cent.

Nearly half the clients interviewed in the survey have an agency of record, with 41 per cent using an agency on a project basis. This might be part of the reason for the emergence of a premier league of agencies. Long-term strategic engagements not only help to build an agency, they also embed its reputation as a serious player.

For those operations stuck in the first division, the danger is that the future holds only a constant round of ad hoc tactical executions. This in turn makes it harder to attract heavyweight talent that pulls in serious clients. The achievement of an agency like The Yellow Submarine in crashing the top ten two years running is therefore to be applauded all the more.

* The top ten agencies have consolidated their ‘premier league’ status, although there has been a reshuffle among the top five. IMP Group moves up to number one, from fifth place last year. Triangle drops from top slot to fourth place. KLP Euro RSCG move up from fourth to second.

* For the fourth year running, account handling remains the top criterion for choosing an agency. But this year, it shares the top slot with creative ability – conceptual and execution.

* This year the SPCA knocks the ISP off the top slot as the preferred association membership when choosing an agency.

Market Management Services interviewed a sample of 301 respondents chosen from Marketing Week’s circulation list. To be eligible for inclusion in the survey, respondents had to be marketers with responsibility for purchasing services from a range of external marketing services consultancies – including sales promotion – working within one of the UK’s top 100 spenders on advertising, as measured by MMS.