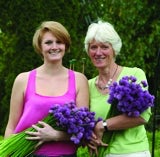 Flowers from the Farm hopes to attract more than 250 small scale flower growers in the UK to join and help run the co-operative which will then identify local markets and promote the brand.

Michael Fairclough, head of community and campaigns at The Co-operative Group, says: “The economy is driven by public and private business while the third sector and co-operatives have contributed from the sidelines. We want to see social enterprise at the heart of the economy and that’s not possible unless we get our act together on marketing.”

The not for profit co-operative will use membership fees to promote locally grown British flowers in the UK and hopes the marketing cooperative will give it the strength and scale to advertise nationwide and take on international growers than import flowers to the UK.

Fairclough adds that “a brand will only grow when it is taken seriously, and not going to be taken seriously on a small scale. Flowers From The Farm hope to promote themselves and the industry in a way that alone they couldn’t.”

The marketing initiative is part of The Co-op’s broader Ethical Plan, announced in February this year. As well as setting out ambitious plans for its own business, The Co-op hoped to encourage more organisations to “join the revolution” and create social enterprises and co-operatives of their own.

It pledged to support £11m in co-operative enterprise by 2013 through its Co-operative Enterprise Hub.