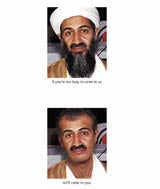 The combined might of the US Army, the CIA and various Afghan militia have spent the past three years trying to winkle out Osama Bin Laden from his Afghan hideaway. But all they needed to do was ask the creative team at Scholz &amp; Friends Antwerp, who appear to have given him a modelling contract. This ad has been appearing in the Belgian press, promoting ‘home delivery hairstyling’ company Beauty Services (although the Diary happens to know that OBL frequents Alex &amp; Jimmy’s salon in Muswell Hill). Readers of the Washington Post should look out for the follow-up campaign in March. The ad will feature Ulrike Meinhof before and after Botox treatment, and is sure to be a scream.

TBWA/London has created the first masterbrand advertising campaign for yoghurt brand MÃÂ¼ller under the tagline ‘Lead a MÃÂ¼ller Life’. The campaign will run from this month and will include television, outdoor, national newspaper and consumer media.

Oil giant Shell is to review its global media planning and buying account, worth more than $200m (£106m), in an attempt to consolidate its roster. Shell’s global roster includes UK incumbent MediaCom, which handles media for Europe; Maxus, which handles Eastern Europe; J Walter Thompson, which handles print and internet businesses in the US and […]

First Drinks Brands is understood to be looking for a UK agency to handle the multi-million pound advertising for the Seventies iconic mass-market wine Mateus Rosé. The brand does not have a retained UK advertising agency. It is understood that the drinks company has shortlisted five agencies to pitch for the business. Last summer, First […]