What gives consumers confidence in the stock market, and how can we be encouraged to invest our money to revive the flailing economy? These are the questions on everyone’s lips but, for now, the answers seem to elude us.

Before the credit crunch hit, it was assumed that the stock markets themselves inspired confidence. But when looking at Nationwide’s Consumer Confidence Index (NCCI) alongside the FTSE 100 Index, this is clearly not the case. When re-indexed to the NCCI, it becomes apparent that the FTSE growing has little or no correlation with consumer confidence. It appears that consumers assume the markets will rise, and only when they fall do we see a reflection in consumer confidence. The ensuing falls in confidence suggest that there is a conduit between the stock markets and the consumers that holds the key to confidence. It is highly likely that this conduit is the media, which forces the movement in consumer confidence. Unfortunately, this also means that confidence will not return until the good news does as well.

Last quarter we reported that one of the big differentiating factors behind the Nationwide Consumer Confidence Index was age, with younger and older consumers differing greatly on their views towards both the economy and their future household income. We asked whether this youthful optimism was simply a short-term naivety that will slowly fade, or whether older consumers, despite their memories from the 1980s, will start to see light at the end of the tunnel. When looking at the scores this month, it seems that the latter is correct.

Three months ago we saw a large fall in confidence among 45- to 59-year-olds, making them the least confident consumers in the UK, largely driven by their pessimistic views towards the economic situation and their expectations of future household income. The theory behind this is that many people in this age group are pre-retirement consumers who were working during the recession 20 years ago and held memories, and worries, dating back to those times.

It is interesting to report this quarter that consumers from the other age groups have followed the lead of the 40/50-somethings, with confidence falling. However, the 40/50-somethings have not reacted too badly over the past three months, which were filled with bankrupt financial institutions and nationalised banks. It appears that in times of financial difficulty the wise old heads really do know best.

The other interesting trend that emerges by looking at the age groups separately is that the younger the consumer, the more confident he/she is. Younger consumers have a longer time to wait until retirement, and as a result they aren’t as dependent on strong stock markets to grow their investments and retirement funds in the short (or even medium) term. However, with the global financial climate changing, people will not only be worrying about savings, but also about the basics such as job security and homes. It will be interesting to see how youthful confidence holds up in the coming quarter when job security is likely to fall and mortgages are even harder to come by.

It is also interesting to note how the different regions in the UK have reacted to the credit crunch. London and the South-east, for so long the home of the thriving big businesses in the UK, have both fallen 24 points, just below the UK average of 26 points. However the regions that suffered the most in the last recession – the Midlands, Wales and the North – have all fallen by greater than average scores.

The region that has seen the greatest downturn over the past six months is Northern Ireland. Although it reflects the overall sentiment in the UK, and for a few quarters was the most confident region, Northern Ireland’s consumers are reacting with greater volatility.

It will be interesting to see if this time, the Midlands, Wales and the North are the early indicators that the 45- to 59-year-old group were last time round. The regions may remember the effects of the last recession and lead the way to further decreases in confidence across the country.

In summary, the research shows that this quarter, consumer confidence is not directly affected by falling stock markets. They may be indirectly linked, via negative media reports, but there is no immediate link between a falling stock market and consumer confidence. When forecasting how consumer confidence will move, it pays to talk to those who have been there before. Confidence among the consumers that witnessed the last recession fell 22 points in the last quarter, and this quarter the other age groups have followed suit. However, in this quarter, the older group has fallen only two points. Does this mean the beginning of the end for decreasing confidence or is it simply a case of nobody knowing what to think any more? We’ll have to wait and see. 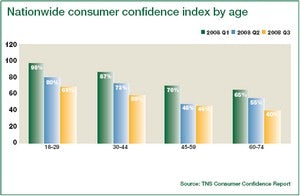 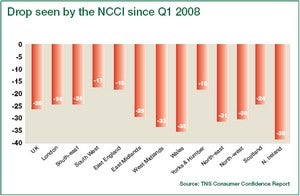 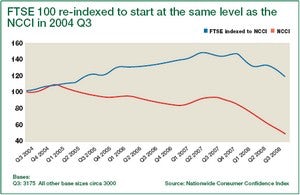