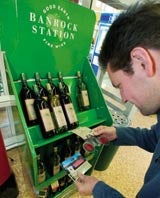 Coupons are generally regarded as the unglamorous side of marketing. Despite more sophisticated loyalty schemes and growing popularity among consumers, coupons still suffer a negative image within the industry.

But research commissioned by NCH Marketing Services, which processes 85 per cent of all coupons in the UK, could help the sector shake off its dowdy image because it shows a dramatic turnaround in consumer attitudes towards money-saving vouchers.

The research, carried out by NOP World, shows that the image of coupons has changed. Prompted by the explosion of reward cards and coupons being available on more varied products, voucher schemes are rising in popularity.

Using coupons was once thought to be the practice of low-income households, but the research shows that it is now seen as an acceptable part of shopping by a variety of consumers. Of those surveyed, 86 per cent disagree that coupons are only for people on low incomes and nearly 71 per cent believe that it is now more acceptable to use coupons and vouchers than it used to be. This is reflected by the fact that 93 per cent of respondents use them as a “good way of saving money”.

The research also shows that coupons are redeemed by a diverse range of consumers, with many being younger and more affluent than the stereotypical coupon user. Today’s coupon user is just as likely to be a young urban car- driving male downloading coupons from the internet as a female pensioner catching the bus into town with vouchers cut out from grocery packaging.

Once the preserve of female shoppers, the data also shows that their male counterparts are catching up with them, with 51 per cent of the men surveyed admitting to using coupons compared with 65 per cent of women.

The proportion of users is becoming similar for each different age group, although coupons are still most popular with older consumers. About half of the 15- to 24-year-olds surveyed admit to using coupons and 58 per cent of 25- to 34-year-olds. The 45- to 54-year-olds have the highest usage at 62 per cent.

The stereotypical image of housewives being the most prolific voucher users is outdated: the majority of those surveyed are in employment and coupon use was divided evenly between working and non-working respondents.

Coupons, it seems, are losing their negative “cheapskate” image and are seen instead as a frugal investment. The research shows that most people who redeem coupons are wise spenders. The majority of respondents are homeowners and of those, 60 per cent use coupons.

The report shows that the modern coupon user owns a PC and is internet-savvy. Sixty per cent of the research respondents have a PC at home and 52 per cent had accessed the internet in the three months before being surveyed. Redeeming vouchers is something the computer-savvy feel comfortable with as 62 per cent of PC owners and 59 per cent of regular internet users do so. While only four per cent had used coupons or vouchers found on the Net, the high levels of PC ownership and internet usage suggest electronic distribution of vouchers has the potential for growth.

The growing use of coupons suggests that the UK is following the US’s lead. There, money-off coupons are very popular with consumers, and coupon-crammed newspaper supplements, known as free-standing inserts, are snapped off the shelves.

Coupon use in the UK still tends to be through the traditional channels, such as direct marketing: 92 per cent of money-off vouchers were collected this way. Other key ways for consumers to receive coupons are on food packaging, with 91 per cent of respondents cutting them off packaging; in supermarket publications: 86 per cent of users clip out these coupons; in newspapers and magazines: 85 per cent collect coupons this way; and loyalty card schemes, 81 per cent of users earn them through this route.

Once converted, users are loyal to coupon schemes with 45 per cent of respondents using them on at least half of all shopping trips and 19 per cent on most trips. Marketers looking for ways to develop brand loyalty should note this change in attitude to coupons and the fact that younger and more affluent consumers are prepared to use such schemes as a viable way of saving money.