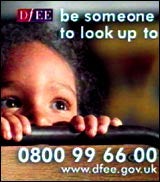 The Department for Education &amp; Employment is to launch a &£1.5m campaign next week to recruit more people into childcare management. The campaign, created by D’Arcy, will begin with TV commercials, while press ads will break later this month. The TV campaign, consisting of two 30-second executions, show children testing childcare job applicants to see who best fits the bill and use the catchline ‘Be someone to look up to.’ The first features children witnessing different candidates attempts to make a monster out of a cardboard box, some ribbon and an egg box. The second execution features older children acting as judges as they audition adults for the position of their childcare worker. Media is planning is through MediaVest.

Like AOL and Time Warner, Vivendi and Seagram may find that their merger affects the quality and range of the content they provide.

Customer service companies are giving their consultants more freedom on the phone, allowing them to provide a more casual, flexible – and hence effective – service.