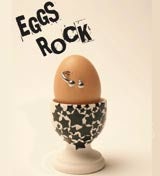 The Diary once went to work on an egg, but its battery went flat and there was no shell station in the area. These days, eggs are rather out of fashion among young people, according to the British Egg Industry Council.

To crack the youth market, the BEIC decided to fry a fresh approach. It recruited students from the London College of Fashion, and gave them free range to come up with ideas to show the kids that eggs are hard to beat.

There are certainly parallels between the egg and fashion industries: a large proportion of our eggs are produced in the avian equivalent of sweatshops, and fried gypsy skirt sandwiches are a common sight in greasy spoons up and down the country.

The Diary’s favourite idea was the one shown here – egg with piercing, which captures perfectly the “chav” trend – although a nice faux-Burberry check would have set it off a treat.

But in its quest to bring couture into cookery, the BEIC has overlooked one vital fact. Eggs don’t need to dress to impress – they get laid anyway.