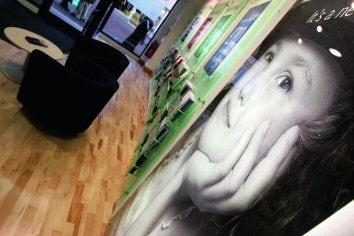 Mention point-of-purchase (POP) or point-of-sale (POS) advertising, and most marketers will immediately think of packaged goods in a retail environment. Traditionally, POP has been found in supermarkets, off-licences, chemists and the like, or in fashion outlets like shoe or clothes shops.

But the UK’s high street is changing, and many different kinds of outlets are now aggressively using POP to get consumers through their doors and handing over their cash – including companies that 20 years ago would never have considered themselves to be involved in “retail”.

Walk down any high street today, and the chances are that you will see banks advertising “loan sales”, post offices with in-queue TVs showing rolling ads, estate agents that look more like trendy wine bars and travel agents with the latest hi-tech display systems actually built in to their windows. The traditional packaged goods retail outlets are in danger of being left behind as service retailers enthusiastically endorse the power of the latest forms of POP.

Martin Kingdon, director general of the Point of Purchase Advertising Institute UK, says: “The fact that point of purchase is being used to sell a service rather than a product isn’t important. The basic principles for using POP are exactly the same as if you were selling a packaged goods brand.”

Actually, Kingdon adds, POP can be an even more powerful marketing tool for high street service marketers than for traditional packaged goods marketers and retailers, for the simple reason that “most people who go into a bank or a post office are there with a specific goal in mind. They aren’t there for pleasure, they aren’t there to browse. They are there to carry out a particular transaction, and the research shows that they move in absolutely straight lines – they head directly for the counter. POP displays have to work as an inter-ruptive media in that situation.”

Kingdon’s point is roundly supported by Adrian Thomas, head of retail at agency Billington Cartmell. Thomas says/ “The likes of Lloyds TSB or Halifax Bank of Scotland are no longer just copying what the big packaged goods retailers are doing: now they are looking to lead the field in their use of POP.”

History repeating
It’s not the first time that a service sector has taken over as standard bearer for POP – as Thomas admits, for some years mobile phone shops were the places to find cutting edge POP. Arguably, though, mobile phones have become just another packaged goods item. Services retailers are now the trailblazers – probably because, as many experts agree, their need is the greatest.

Thomas says: “With banks, you don’t get people window shopping. You have to work a lot harder when you’re trying to engage people on the high street, particularly if you are trying to attract non-customers.”

Inside, banks also have their own particular requirements, Thomas continues. They must ensure that customers can move around easily in store, but at the same time, “you must make the best use of key ‘dwell points’ like queues and waiting areas. The area immediately around the counter is also a very powerful space that must be properly exploited.”

Billington Cartmell works on Lloyds TSB’s in-store advertising (it was named the banking group’s retained retail agency last year), and has developed a series of what it calls “Permission to Speak” pieces – POP items that are interruptive of the usual in-branch behaviours, and so create opportunities for dialogue between customers and staff. For example, the agency created a pull-out ready reckoner for Lloyd’s TSB’s High Speed Loan, showing how much the monthly repayments would be for different value loans over different repayment periods.

Coutts Retail Communications managing director Richard Saysell says: “One of the key challenges for all businesses in the retailer space centres around engaging, and even entertaining, the consumer for longer. Currently, it seems a lot of non-traditional retailers are working hard to find the right mix – estate agents now have bars in them, banks, book-shops and even betting shops have cafés, even male crèches are appearing. It’s a simple concept: stay longer, feel more relaxed and spend more money. However, companies must make sure that the fit is appropriate – it is all about mindset, do customers really want to sit and have a coffee in the local branch of their bank or building society?”

The competitive edge
Chris Killingbeck is chairman of Gasoline, the below-the-line marketing agency which is part of the VCCP Group. He points out that one of the main factors affecting service retailers such as banks and travel agents is increasing competition not just from the big supermarket groups, but, perhaps more importantly, from online services providers.

Killingbeck says: “Retailers are opting for more aggressive and astonishing ways to compete, and often POP activity is the quickest and most cost-effective way to promote and, in turn, sell.” But there is a potential downside to service providers’ enthusiastic uptake of the latest POP techniques and technologies, he warns: “POP is being put into overdrive, to such an extent that many are pushing the boundaries and in turn their own credibility. Such is the fierce competition to entice customers on the high street that companies like Barclays are using questionable deliverance that is at odds with brand image. For instance, its Chelsea branch claims ‘The nicest people in London work here’. They may be very good, but it’s quite ridiculous to make such a claim, especially if the actual delivery may be at odds with it.”

Real estate experts
Killingbeck believes that one of the most successful service retailers in terms of its use of POP techniques is the estate agency chain Foxtons. He says: “Foxtons has successfully driven its brand via aggressive marketing including using ‘for sale’ boards outside houses as ad space, plastering its logo on the side of its estate agents’ Minis and, of course, on the high street where they entice people into their branches with the offer of a decaf skinny latte or glass of fashionable pomegranate juice.”

Indeed, Foxtons is singled out by a number of POP experts for praise over its innovative interior redesign. Branches now feature a wall of bar-style, glass-fronted chiller cabinets filled with soft drinks and beers, and a comfortable area for potential house purchasers to sit and enjoy a drink while leafing through property details.

Thomas observes: “Foxtons recognises that someone who is considering spending around £300,000 on the biggest purchase of their life isn’t likely to be impressed by a space crammed with desks where they have to fight to get the attention of someone who is on the phone. The bar concept allows people to relax and it gives staff time to sort themselves out.”

John Phillips is client services director at retail marketing agency RMP. He says/ “Foxtons probably knows its target market a lot better than most of its rivals do. Estate agents have tended to be a bit cold and impersonal – a bit like the old-fashioned car showrooms. Foxtons’ branches are clean and welcoming.”

Phillips also argues that banks and similar service retailers with high street outlets are in effect being forced to break new ground in their uses of new technology for POP. “Banks tend to have a much smaller area to play with in terms of the floor space they have in their high street branches. If I was looking at POP for a bank, I’d be focused on new technologies and digital screens rather than cardboard cut-outs.”

Technological advantages
Space utilisation is, of course, a major advantage of many of the latest high-tech POP systems. Flat screen TVs offer huge advantages over old-style cathode ray tube TVs or other projection systems, while the latest developments are even thinner – 3M, for example, has developed a touch-sensitive film screen that is stuck onto a window.

But BCL’s Adrian Thomas warns that marketers have to be intelligent in their use of in-store TVs and interactive screens. “You can’t just be running a loop of ads all the time. You need to offer something that adds value to the customer – so you should be combining news, weather and sports information, for example.” Music is another area where technology has developed, Thomas adds. Irritating piped “muzak” that fills the entire retail space is now being phased out: the latest sound systems “allow you to ‘zone’ sound in the retail environment – so music doesn’t have to be intrusive any more. You can restrict it to seating areas, for example.”

However, before service retailers rush headlong into new technology, they need to be aware that not all UK consumers necessarily react positively to tough screens and even Automated Teller Machines (ATMs). Thomas says: “Obviously, there are plenty of people who love new technology. But, in this country, with banks, there are still a large number of consumers who are happier discussing important matters like mortgages or loans with a real person, rather than an image on a screen.”

“I think many marketers and brands could learn an enormous amount from David Camerons use of media to generate votes/ sales.”

Williams F1 has updated its race team’s identity with a logo and trackside branding. The designs have been created by brand consultancy UffindellWest, brought in to rejuvenate the brand in time for the Australian Grand Prix in March. Sponsors include Royal Bank of Scotland, Lenovo, AT&T, Allianz and Reuters. The drivers are Nico Rosberg and […]