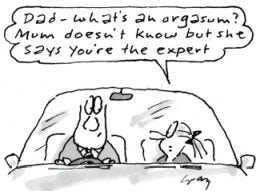 It takes an expert to defy common sense by asserting that advertising makes us fat or, as we were told last week, mice don’t like cheese.

Some years ago, in the course of my journalistic duties, it was my misfortune to interview a sententious old boy, the type who sits at a corner bar stool, wears a cravat and has his own monogrammed tankard. During the conversation I used the work expert. It was a mistake.

“Ah, expert,” he said, and if he did not at that point take a dribbling pipe from his mouth, he should have done. “Expert comes in two parts: ex, meaning past-it, or done for; and spurt, meaning a small squirt.” And with that, he sat back with the sort of small, satisfied smile that might have crossed Socrates’ face after uttering a particularly telling fragment of dialectic.

The trouble is that the old sod was right. Experts are not to be trusted. Marketing has, over the years, been afflicted by more than its fair share of expert opinion. These sages usually believe that marketing in general – and advertising in particular – has no effect on them personally, as they are much too clever and above such things, but is capable of influencing lesser beings, invariably for the worse.

By this argument, it is because of advertising that impressionable people inhale and ingest all manner of things that are bad for them; it is also through advertising that the same, simple folk are persuaded to want things they would not otherwise have wanted – and without which they would be better off. It follows, in the opinion of experts, that much good is to be achieved and many lives saved by the simple expedient of banning advertising.

If I may be permitted to remove a dribbling pipe from my mouth, experts come in two types: those who wish to scare the wits out of lay people and those who take pleasure in debunking lay people’s cherished beliefs.

The latter look around for some treasured item of popular folklore and, with smug satisfaction, declare it to be a foolish fantasy. So don’t think you will get less wet if you run through rain, or that vitamin C will ward off colds, because both are examples of silly received opinion.

On rare occasions, however, the layman bites back – and what fun it is when he does. We had just such an example only last week. First came the utterance of the expert. David Holmes, whose unusual calling is that of an animal behaviourist at Manchester Metropolitan University, stepped out from his laboratory and declared that mice are totally uninterested in cheese.

“They respond to the smell, texture and taste of food. Cheese is something that would not be available in their natural environment and, therefore, not something that they would respond to,” Holme said. According to this expert, mice actually prefer to eat grains, fruit and cereals.

Well, I used to have a pet Labrador who, true to his breed, had a prodigious and catholic appetite. I doubt that peeled prawns and Maltesers, two of his favourite items, were stalked in the wild by his wolf ancestors, but he was prepared to give them a go.

So isn’t it possible that mice, while unlikely to come across mature cheddar during their normal daily foraging in fields, might enjoy a nibble if it were put before them? Support for this view came swiftly. On the Daily Telegraph letters page, David Sharp of Peterborough wrote: “I was asked, last year, to deal with a mouse infestation and used three traps, approximately six inches from one another. One, based on the theory of ‘natural’ bait, had apple as an attractant, another milk chocolate and the third cheddar cheese. The result after six weeks was: chocolate 0, apple 0, cheese 22. My conclusion? These particular mice preferred cheese to apple or chocolate.”

Josephine Gilbert of Hemel Hempstead added: “I found that a tasty piece of Davidstow Cheddar has tempted at least 15 mice into my mousetrap this year.” Expert 0, lay people 2.

There is, however, no escape from the long reach of the expert. The latest target is the fatties. If you are obese, you are going to explode and go blind. It’s not a matter of if, but when. And don’t think eating less will help. That’s a popular myth. The answer is to ban advertising.

Volkswagen has promoted Stephan Schaller to run its commercial vehicles division. He will replace Bernd Wiedemann, who retires at the end of this year after 35 years at Volkswagen. Schaller, a former BMW executive, has been a member of the division’s board with responsibility for product manufacturing since 2004. He will take over as head […]

When a disgruntled member of staff interacts with customers, the result in Little Britain terms can be ‘computer says no’ – which makes encouraging positive attitudes that much more important. Carphone Warehouse chief executive Charles Dunstone says the recent launch of his brand’s broadband service has been a “painful” experience (MW last week). And it […]

Toshiba is uniting with leading movie studios and technology companies in an attempt to beat Sony in the race to replace DVDs with a new format. The company is in talks with potential partners looking to form an alliance in Europe to promote HD DVD, which will battle against rival DVD format Blu-ray – owned […]