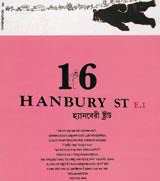 The Far East seems to be the answer to all things business-related these days. From the Chinese backers that were feted as MG Rover’s last hope to the transfer of British call centres to anywhere in India with a phone socket, it would seem that those seeking prosperity should head east. It therefore comes as no surprise to see that Wieden &amp; Kennedy has decided that Elsley Court was too stuffy and Western in its ways, and is jumping on the bandwagon by relocating in the east. Hanbury Street in E1 to be precise. As only ad agencies can, W&K is celebrating the move to the land of curry houses with a celebration of all things Eastern, including this notification claiming “the Far East was too far, the Near East looked good”. The reverse of the sheet contains a map of the landmarks that are important to the W&K staff, which refers to the local Pizza Express as “the enemy”. You wouldn’t know that W&K has just won the Pizza Hut contract, would you? The map also shows other east London tourist attractions such as “the bar that used to be a toilet” and, curiously, “Jack the Ripper’s local”. Do W&K know something that’s been baffling historians and detectives for the past century?

Fallon has created a national outdoor and online campaign for Sony’s new range of Walkman MP3 players. The campaign will use the new global Sony brand line, ‘like.no.other’, and will emphasise the Network Walkman range’s key benefit over the market-leading Apple iPod – its 40- to 50-hour battery life. The six-sheet posters and online executions […]

I was interested to read the recent article “Consumers and e-tail begin to click” (MW 14 April). Royal Mail’s research showed that 29.4 million people used the internet to buy gifts last Christmas, great news for e-tailers. However, there are still lessons to be learned and meeting the high expectations of online consumers is difficult […]