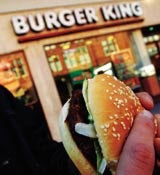 Dining out and eating on the move have become part of everyday modern life and last year Britons spent £26bn eating out. This was down 3.2 per cent year on year, which can largely be attributed to poor summer weather. Some 4.6 per cent of this was spent on what is known as “fast-casual dining” – namely snacking in coffee and sandwich bars. The sandwich has become the number one meal eaten out of the home – 356 million occasions. This means big business for those retailers driving the fast-casual trend.

Research by TNS shows that 2.8 billion meals were consumed outside the home in 2004, of which 238 million were eaten in, or bought from, sandwich or coffee shops. This trend is indicative of our increasingly cash-rich, time-poor lifestyles – consumers want a fast, easy meal that is enjoyable, healthy and convenient – the top three requirements identified by consumers. The “fast-casual” outlets such as Starbucks and Pret A Manger, two of the leading retailers in this market, have capitalised on this trend, stealing customers and market share from fast-food outlets – which have experienced a five per cent decline year on year – as well as traditional restaurants.

According to TNS, 28 per cent of all food eaten out of the home is eaten on a lunch break – one of two key markets for fast-casual dining outlets. In recent years the number of coffee and sandwich outlets in town centres has increased significantly, as chains such as CaffÃÂ¨ Nero and Subway battle for weekday worker and weekend shopper trade. Some 33 per cent of meals eaten in coffee shops are by people on shopping trips, showing the importance of this market to the sector.

The growth in the number of coffee and sandwich shops is having a noticeable impact on the out-of-home dining sector as a whole. While it is predominantly fast-food restaurants that are experiencing greater erosion of market share, other traditionally “unhealthy” snacking options, such as vending machines (declining by 2.8 per cent in the past year) are also being squeezed. The pub sector is one key market that has not suffered a negative impact from the changing demand among consumers. The number of meals eaten in pubs has fallen by just one per cent in the past two years – in line with the out-of-home dining market as a whole, which has also fallen by one per cent in the same period.

The reason for the success of the pub sector is that people prefer to socialise in pubs when eating out, consistently making it the top out-of-home dining choice with 367 million meals consumed in pubs over the past year. Interestingly, there has been a significant rise in the number of snack foods, such as sandwiches, eaten in pubs, which are up two per cent compared with last year, indicating that while consumers are not prepared to give up the pub as a social venue, they are demanding more “fast-casual dining” here as well.

Two key sectors of the population are driving the fast-casual trend in the eating-out market. First, there are workers – the cash-rich, time-poor typecast who have spare income but very little time to enjoy it. Significantly 25- to 34-year-olds account for nearly a quarter (24 per cent) of all meals eaten in sandwich bars. The second is the over-55s – empty-nesters with spare income, either approaching or in retirement, who use coffee and sandwich bars as a social occasion. This group accounts for 37 per cent of all meals consumed in coffee or sandwich shops.

Significantly there is one motivation that unites these two groups: health. TNS research shows that health is the primary consideration among those consumers who bought the 48 million meals eaten out of the home in the past year. This concern about health has grown by a significant 22 per cent year on year, demonstrating the importance of healthy eating these days.

Health is an issue that the sector simply can’t ignore. Coffee and sandwich bars have stolen a march by promoting freshly prepared, quick-to-eat options, fulfilling many consumer demands. Previously, one of the only quick dining options for consumers was a burger bar; these have seen a notable decline in business (9.3 per cent year on year). McDonald’s aggressive marketing strategy promoting its new healthier range demonstrates just how important this issue has become.

Currently, restaurants that capitalise on the evening market are mainly unaffected by healthy eating as they are still viewed as a treat – ten per cent of evening meals eaten out are chosen as a family treat rather than for health or convenience. However, this situation is also set to change in time. Wellbeing will become a key factor in this market and traditional restaurants have an opportunity to exploit the changing demands of the British public.

The health revolution will not stop here. While the market cannot ignore the demand for fast, convenient food, fast-casual outlets must ensure that they are perceived to be offering healthy snack options.

The impact of television series Jamie’s Dinners shows this is not just an issue for the out-of-home profit sector, but also the cost sector (such as the National Health Service and schools) where 15 per cent of out-of-home meals are consumed by some of the most vulnerable sectors of society. Increased education at this level will filter through and wider understanding of healthy eating will be part of life, meaning that healthy eating is not a short-term trend, but the shape of things to come.

As any fule kno, it’s important to feel valued. Many companies try to make their employees feel part of the team, perhaps by paying them bonuses, giving them extra time off, praising them in front of the whole company or even just buying them pizza from time to time. The Marketing Store, however, has its […]

EasyJet is creating a one-off spoof of the Financial Times in a bid to promote its service to businessmen. The Flynancial Times will be carried and read by bowler-hatted, besuited men on public transport around central London today (Wednesday). The paper will be printed in the familiar pink of financial pages. It will carry easyJet […]