According to the latest government warnings, 12 million UK consumers will be obese by 2010 and, perhaps inspired by this prediction, the television schedules are now dominated with programmes dedicated to health and wellbeing.

Accordingly, as these messages filter through, consumers are altering their behaviour, and brands with a healthier image are increasing sales at a great pace. Such trends have also paved the way for retailers and brand manufacturers to redefine what healthy means, with many introducing new food and drink brands centred on functional health and wellbeing benefits.

With health and nutrition on everyone’s radar it is necessary to look at the messages that have achieved most cut-through and the extent to which they have impacted on consumer intentions, as well as conducting a health check on consumers’ own attitudes to their health and diet.

According to recent consumer research conducted by insight consultancy Nunwood, 73% of consumers are unhappy with at least one area of their diet. The largest area of worry is fat intake, which over one-third of all consumers (35%) are unhappy about. This is followed by sugar intake (14%) and salt intake (7%) – but 16% of consumers are worried about their intake of all three.

The research also highlights the pivotal role consumers expect manufacturers to play in acting responsibly to help tackle the obesity timebomb. At present, a majority of consumers (59%) agree that food and drink manufacturers should do a lot more to help improve the state of the nation’s health. How exactly this help should best manifest itself remains to be seen, although there are some clear hints as to some potential “starter for ten” areas.

The first relates to the five-a-day guideline. Some 42% of consumers say they find the target of eating five pieces of fresh fruit or veg every day extremely difficult to meet – a finding that was universal across the sexes, and different socio-economic and age categories. Convenience, a key issue in the food and drink sector, plays a part and the introduction of product formats enabling consumers to intake more than one of the five a day in a single product or serving would certainly help. Innocent Drinks already plays heavily on this premise and has been successful.

Another key area is the realm of health and nutritional labelling. Some 37% of consumers always check the nutritional information on food and drink packaging before buying products. Clearly it is vital this information is presented in a clear, succinct and easy to read way that allows consumers to make quick but informed judgements about whether it is healthy or not.

However, 28% of consumers are confused by on-pack nutritional labelling, and only 15% say they completely trust the health and nutritional claims made on food and drink products – there is work to be done here by manufacturers and retailers.

As widely reported, manufacturers, retailers and government bodies are taking action, although no consensus has yet been reached on what constitutes the best labelling scheme. On the one hand there is the traffic-light system favoured by the Food Standards Agency and adopted by the likes of Sainsbury’s, The Co-op and Waitrose. On the other, there is the Guideline Daily Amount (GDA) system being put forward by the Food and Drink Federation, which has members including major packaged goods manufacturers such as Kellogg, Nestl?nd Kraft.

But which system do consumers favour? As part of its research, Nunwood showed consumers a selection of de-branded nutritional labels – two traffic-light designs and two GDA designs – and asked them to select which one they preferred and why. While the combined performance of the traffic light designs versus the two GDA designs would indicate a positive result for the former system, in terms of individual designs, the Tesco GDA design actually fared best, with 40% of consumers favouring it. Overall, consumers want labels to be simple, clear and easy to read, but at the same time not so simplistic as to be patronising.

Consumers also indicated that they believe government has an important role in helping to address national health issues. Interestingly, in terms of message cut-through, less than one-third of all consumers (28%) say they are worried by government warnings of an obesity epidemic. Yet an equal proportion state they have positively changed their behaviour because of such warnings. However, government could clearly go one step further than just issuing warnings; 29% of consumers agree “junk” foods containing high levels of sugar, fat and salt should be taxed to curb their consumption.

Overall, the study suggests that while it is ultimately down to consumers to take action to improve their own diets, both manufacturers and government should be doing more to help them. Specifically, consumers worry about fat levels most and these need to be tackled first and foremost.

Getting nutritional labelling right is fundamental if consumers are going to restore their faith in food and drink products, and trust the claims made by retailers and manufacturers again. Clearer, more succinct, and less patronising labelling schemes are the way forward. Manufacturers could also benefit from focusing on developing products that enable convenient intake of a healthier diet, specifically to make the likes of the five-a-day rule easier to stick to. 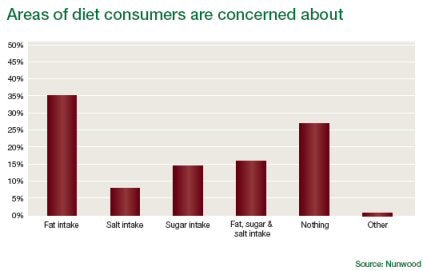 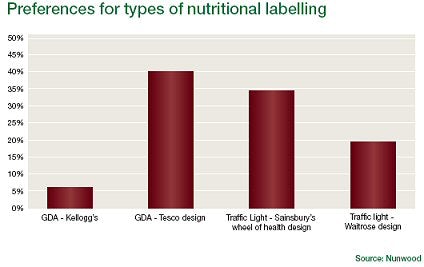