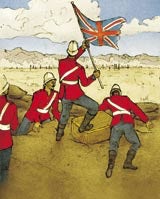 Overseas takeovers of UK companies may bring welcome financial and strategic clout to brands, but as management changes at Best Foods, Abbey and most recently Inbev – with the departure of Phil Rumbol – show, it can spell the end for the UK marketing chief. David Benady reports

As some of the UK’s top brands are acquired by overseas companies, alarm bells are ringing for British marketers. Foreign ownership threatens to downgrade their roles, reduce their control over brands and turn them into powerless puppets of global corporations.

Last week’s announcement that Phil Rumbol, UK marketing director of Stella Artois brewer Inbev, is quitting to become marketing boss of Cadbury Trebor Bassett, added to the impression that UK marketers are being forced to retreat in the face of globalisation.

Rumbol is the latest in a line of long-standing, senior executives to leave the company. Inbev was formed last year from the merger of Belgium’s Interbrew and Brazil’s Ambev. It followed Interbrew’s takeover in 2000 of the brewing operations of Whitbread, home to UK marketers such as Rumbol. But one source claims that since last year’s merger, Brazilian and Belgian management have begun a “pincer movement” to squeeze out UK senior management and replace them with bosses from their own businesses.

In December, president of Western Europe Stewart Gilliland, a former Whitbread marketing director, left Inbev without a job to go to and was replaced by Stefan Descheemaeker. Meanwhile, Ambev’s Carlos Brito became chief executive of Inbev, replacing Interbrew man John Brock, whose contract was not renewed.

Rumbol is said to have seen his authority diminish in the new structure, and felt increasingly powerless within the global corporation, so decided to jump ship. At the same time, Inbev’s top UK brand Stella Artois is coming under increasing Belgian control, which could affect the way it is marketed in the UK. Rumbol was unavailable for comment, though he has said the offer from Cadbury was “too good to turn down”.

The Inbev reshuffle comes as ownership of British brands changes rapidly, and UK companies are sold off to a range of overseas investors. UK spirits giant Allied Domecq was acquired by France’s Pernod Ricard last year; Spain’s Telefonica is looking to buy UK mobile phone brand O2; Hilton Hotels is being sold by UK parent Hilton Group to the owner of the brand in the US; and Iceland-based Baugur has bought into British high street businesses – such as Iceland.

While new foreign or global owners still need the local knowledge that a UK marketer can provide, power tends to shift overseas. On the positive side, UK marketers may be able to rise up the ranks within these acquiring companies and work on a broader international stage. But they are also likely to lose out as new owners put in place their own arrangements.

Banco Santander’s acquisition of the UK’s fifth-largest bank Abbey in 2004 led to a restructure in the UK marketing operations. They were downgraded, triggering the departure of director of customer propositions Angus Porter. He plays down the global nature of the issue, saying/ “Whether the acquisition is British or overseas is secondary – it is natural that the acquiring company will want to put in place its own strategy. They wouldn’t have bought the company if they didn’t have a view of what to do.”

Even so, Porter believes that chances for career enhancement are as strong as ever, despite these global acquisitions, though UK marketers must be prepared to bid for the increasing number of global roles. “It is important that people plan a degree of internationalisation into their careers early on, as an increasing proportion of companies are run by multinationals. If you spend your entire career working for a UK company and your view of consumers doesn’t extend beyond these shores, you will find it difficult to adapt,” he warns.

Other observers point out that every merger and acquisition has to be judged individually. One source says that while Unilever’s acquisition of Best Foods has led to the replacement of many senior marketers at the food company by Unilever executives, this contrasts sharply with the experience of Diageo. The UK drinks giant was formed from the merger of United Distillers, Grand Metropolitan and the later takeover of Seagram, but the source claims the management has attempted to create something new, rather than allow the dominant culture from one of the businesses be imposed on the others. “The question is do you move towards the Diageo style of creating a new organisation that is greater than the sum of its parts,” the source asks, “or do you say that is irrelevant, because businesses are cultures with beliefs and values and look to promote your own gene pool?”

He adds globalisation is throwing together a number of business cultures that may find it hard to gel – Anglo-Saxons and Latins; Asians and Scandinavians; Japanese and Americans.

David Preston, director of marketing for premium lagers such as Grolsch and Caffreys at Coors Brewers, says an overseas takeover can actually be beneficial. US-based Coors bought Bass’ brewing interests in 2002, enhancing the position of marketing, he claims. “We were part of a UK company that was a conglomerate. Every year there were budget cuts to fund hotel expansion,” he says. As Coors is primarily a brewer, the UK beer business has benefited from the increased focus, he says.

In the past, many packaged goods companies have acquired businesses around the world and nurtured marketing talent as well as their brands. Guy Longworth, a former Kellogg marketing director, now in the same role at Quorn maker Marlow Foods, says: “Acquisitive companies want to create shareholder value. The last thing they want is to get rid of existing management.”

He points out that executives from local markets can rise to the top of packaged goods companies: Ireland’s Tony O’Reilly became chief executive of Heinz; and another Irishman, Neville Isdell, is the boss of Coca-Cola. “Globally, high-quality marketing talent continues to secure a premium because there is a shortage. It is hard to find high-calibre talent,” says Longworth, but he concedes that “not everyone is going to be successful in every company,” whatever their abilities.

Lessons about globalisation were learned the hard way by Australian bank AMP, which set up in the UK to provide mortgages, savings and loans. But its UK business collapsed and it was forced to sell its interests, which included NPI, London Life and Henderson Investors. Paul Gordon, joint managing director of financial services advertising agency CCHM:Ping, warns against companies simply attempting to replicate abroad successful business models from their home market: “AMP was such a dominant player in Australia, it thought it could buy UK businesses, import the Australian business model and people, and make it work. It’s more difficult than that.”

As foreign takeovers gather pace, the standing of UK marketers could be considerably weakened, though each situation should be judged on its own merits. Rather than beating a retreat, marketers should polish up their language skills, expunge any lingering British arrogance from their minds and prepare for life in a rapidly globalising market.â¢