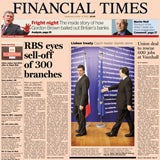 The print, online and broadcast series, called The Future of Finance, will “gauge the impact of the world-wide sector crisis and the unprecedented government interventions that followed”.

The series launches on 19 October and will cover four key topics; the future of banks, governance and regulation, the future of financial markets and regulating bubbles and the future of the global economy, in the form of supplements in global editions of the FT, a four-part television series on CNBC and a microsite on FT.com.

The FT is launching a global marketing campaign to support the series while CNBC will focus marketing on the EMEA and Asia regions.

The print content will include contributions from Prime Minister Gordon Brown and Howard Davies, director of the London School of Economics and Political Science.

CNBC’s TV coverage will air across the EMEA and Asia until 9 November, presented by Geoff Cutmore.