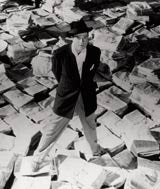 Developing a digital presence for their brands is a life-or-death issue for national newspaper proprietors, but it appears some of Fleet Street’s finest are still slow to react, and lack an awareness of the necessity for strong core values in a multi-platform era. By Mark Choueke

The Sportsman, which launched last week, was hailed as the first UK daily national newspaper to launch in 20 years – a claim rubbished by its marketing director, Mark Dixon.

He contends that the title is not, in fact, a national daily at all, but the type of niche publication that will prove more robust in a declining industry. The Sportsman is entering a tough market, but selling 45,000 copies a day will make it profitable. Dixon says/ “We’ll grow the market, but the betting community already exists.”

Like City AM, which launched in September and already offers podcasts, The Sportsman has arrived in an era when people are comfortable with the possibilities offered by the internet. Unlike older newspapers, where bosses initially pondered whether – and how – to exploit the Web, The Sportsman’s website, which launches in May, will be fully interactive early on, acting as a portal into gaming sites, and offering racing news and tips sent to readers’ mobile phones.

With the possible exception of other niche publications and free versions of current titles, the UK is unlikely to see a national daily newspaper launch ever again. The shift towards consumers, particularly in the 18 to 35 age group, demanding instant news and lifestyle content from computer screens and mobile phones, as well as television and radio, has left newspaper brands facing an uncertain future.

Having watched sales and ad revenues decline for a decade, many newspaper owners were petrified when this multimedia pattern emerged. They acted as though in denial, refusing to accept change while crossing their fingers for the best. Most now accept that without serious digital offerings, it won’t just be their newspapers that eventually die, some of their brands will also cease to exist.

When Andrew Gowers quit as editor of the Financial Times in November after a long career in newspaper journalism, he swore his next job would not involve “ink printed on dead trees”. Gowers takes a grim view of which UK newspaper brands will formulate the successful strategies needed to thrive in this new world order. “I don’t want to play at picking winners – all the existing incumbents are losers,” he warns. “Newspapers are being unpicked whole on the Web. The space newspapers and their sites occupy is narrowing fast, and they have no business model.”

But no newspaper owner worth his salt gives up without a fight. With an eye on future ad revenue, both the Daily Mail and General Trust and Trinity Mirror have been acquiring classified websites. But it is Rupert Murdoch – the self-styled “digital immigrant” hoping to communicate with the generation of young, desirable communicators he calls “natives” – who is grabbing the headlines with a renewed commitment to the digital future. Having splashed out on some costly failures during the 1990s internet boom before losing interest, it is Murdoch’s spending power that now most threatens the lead built up by The Guardian, which has shown great foresight over the past decade in developing its online brand Guardian Unlimited (GU).

Murdoch has spent heavily on gaming, entertainment and lifestyle sites such as Myspace.com – the fifth most visited site on the internet – as part of a $580m (&£330m) shopping spree. His commitment to the internet has reportedly seen him spend $2bn (&£1.14bn) so far, and he recently installed 33-year-old News Corp executive Jeremy Philips to head this acquisition strategy.

Print copy is not doomed

However, while some observers are optimistic about the future, others are gloomy. Associated Newspapers managing director Guy Zitter suggests that printed copy is not doomed “for some years”, but, on the struggle to adapt to readers’ expectations. He adds: “Only the strong will survive. There will be casualties, as there are some very weak brands out there.”

Some brands are working hard to embrace the digital revolution, but it is clear that there may be fewer brands in the future. Manning Gottlieb OMD’s press director Mark Gallagher suggests the popular tabloids may struggle the most, because “entertainment and celebrity news can be found everywhere”.

Another source says: “The interactivity between newspapers and consumers will develop and relate to the core values of each brand. The values of The Sun, Daily Mail and The Guardian are easy to spot. But if you are [Trinity Mirror managing director] Richard Webb or Richard Desmond at The Express, what are you going to do to extend those brands?”

Crucial obstacles to success – such as identifying profitable areas – are yet to be overcome. No newspaper website has yet made money, although GU is set to become profitable at the end of this financial year. Guardian editor Alan Rusbridger envisages future revenue being advertising-based, given the geographical spread of its audience: GU attracts 13 million users every month, putting it among the world’s top 20 online news properties – according to internet consultancy Comscore – but only 4 million of those are UK users. This means GU is being read by a massive audience abroad, in particular the US, where GU ad space is sold to specific American brands.

Rusbridger is discussing potential future US partnerships for GU with the likes of Microsoft, Yahoo! and Google. He explains: “GU is in English, particularly un-American, and both intelligent and liberal: that’s why The Guardian is bigger in the US than the LA Times.”

He describes monthly discussions about ABC audience figures as “parochial”, adding: “Having 13 million global users monthly is fantastic from an influence point of view. In terms of ad revenue, the bigger our audience of bright young people, the better.”

Rusbridger cannot understand why some newspapers – mentioning the Express and The Independent in particular – are still only “luke-warm” in their online commitment. He says Murdoch dithered for too long and has subsequently paid over the odds for his acquisitions.

Yet Andrew Mullins, managing director of Times Newspapers, bristles at the suggestion that The Guardian is ahead of The Times in global brand awareness terms. He claims News International’s multi-platform approach, though in its infancy, will allow it to overtake The Guardian’s number of internet users within 12 months. He thinks that newspapers will always play an important part in the media mix outside the “internet hours” of weekdays nine-to-five.

Brands will still be important

For his part, Group M UK print trading chief Steve Goodman believes brands will retain their individual voice as a means of survival, a way to isolate loyal audiences. He states: “When consumers access content around the clock it’ll be harder for advertisers to know when to reach their audience. Clients may therefore buy into brands rather than media platforms. They may go for Times Online and podcasts, for example.”

Whether future consumers will recognise today’s distinctions between newspaper brands when they are spread across many digital platforms remains to be seen. Publishers of traditional titles need to take firm control of their brands’ direction to prevent the rush to online content diluting, rather than bolstering, circulation.