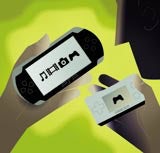 Sony is moving up a level in the gaming market with this week’s European launch of the PlayStation Portable (PSP). The launch sees Sony go up against market leader Nintendo, which faces serious competition after a 16-year monopoly in the handheld gaming market.

Sony hopes that the multimedia device – which unlike Nintendo’s handheld products plays games, full-length films and music – will capture the imagination of consumers across Europe. The PSP appears to have struck a chord in the US, where 2.7 million PSPs have been sold since March. In Japan, where Nintendo has a strong foothold, Sony has sold 2.3 million PSPs since late last year. While the signs look good for the PSP, it still has much to do to get a foothold in the handheld market.

Nintendo’s dominance of the sector, through its GameBoy brand, is such that it has nearly a 100 per cent share of the $4bn (&£2.2bn) global handheld market (NPD Group). Sony is not the first company to try to steal market share from Nintendo: in the late 1980s and early 1990s, Atari and Sega tried to muscle in, but the companies have since bowed out of the portable gaming sector.

Sony, however, claims that it is not looking to compete with Nintendo but instead is aiming to create a new entertainment device category. Sony Computer Entertainment UK marketing director Alan Duncan admits that the PSP has been facing a difficult battle in the Japanese market, where consumers have a long-standing emotional attachment to Nintendo. But he is confident of success in the US and particularly in Europe. He explains: “From a cultural perspective, Europe is perhaps the most prepared for the PSP. People consume more media in far more sophisticated ways. They choose what to consume and how.”

In the short term, he says, hardcore gamers are the target market but the &£2m launch campaign, due to break at Christmas, will target potential users. Duncan says: “Gamers are our bread and butter but they are impervious to our marketing. They know what they want and don’t need us to tell them. With the PSP advertising, we are targeting lovers of technology, people on the move who want to be entertained. These are people who have an iPod, love gadgetry and want the latest technology.”

When the PlayStation 2 launched in the UK four years ago, Sony sold 70,000 consoles in the first week; Duncan expects sales of the PSP to be double that and hopes that sales figures hit the 1 million mark in the UK by Christmas.

The handheld market is virgin territory for Sony but industry observers say that it can conquer it. Games industry analyst Nick Gibson of Games Investor Consulting says that while Nintendo has faced challenges in the past and seen them off, Sony is a force to be reckoned with. He says: “The PSP won’t be a threat to Nintendo in the short term, but as it gains momentum it will eat into Nintendo’s market share.”

He adds that Sony already has strong heritage in the gaming market thanks to the PlayStation brand and that it has the resources to support the PSP properly though investment in marketing and games. He explains: “The success of games hardware is about investing and implementing a successful software strategy and Sony has extremely good momentum in games releases. It is a self-perpetuating cycle: high-quality software and games help to sell the hardware, which is where the likes of Atari failed.”

Observers say this lack of support is also why other players in the sector, such as Tiger Telematics’ Gizmondo, are struggling to make an impact. Sales of the handheld Gizmondo device, which features functions such as a GPRS satellite tracking system and audio and photo functions, have been weak until now, owing to problems such as limited distribution on the high street and a relatively small library of games.

Mark Jarvis, formerly planning and buying director at Carat working on the Gizmondo account, says that Sony and Nintendo are ultimately targeting different markets. He says that the PSP, which will cost about &£180, will appeal to young adults and above, whereas Nintendo, with its cartoon-style games and lower price point – the Nintendo DS costs just &£100 – is targeted at children. But that said, he still says the PSP will have a big impact on the handheld market.

He says: “The PSP will be a phenomenal success. It’s huge in the US and it’s going to be the must-have toy for Christmas in the UK – but for men in their late 20s to 40s. It’s going to be very popular and will attract early adopters, but it will also appeal to a wide range of consumers across age and sex.”

More than just a game

Nintendo marketing director Dawn Paine says that the company is not concerned about the arrival of the PSP because Nintendo is about games, not entertainment devices. She explains: “We welcome competition. It builds awareness of games and there is room for us to co-exist. Sony is moving into entertainment and we are about games. Competition breeds innovation and that in turn expands the sector as interest and awareness grows.”

Nintendo is not going to relinquish its dominant position without a fight. It launched its latest handheld device, the Nintendo DS, last year and has already sold 5 million devices worldwide (NPD Group). It has already followed the DS with the Japanese launch of the world’s smallest console, the GameBoy Micro. The Micro is due to arrive in Europe in November and will cost just &£69. It will be supported by a heavy advertising campaign in time for Christmas, which will coincide with the PSP television campaign.

While the battle begins in the handheld market, Nintendo would do well to learn lessons from the home console market, where it has been squeezed into third place by Microsoft’s Xbox and PlayStation, which have both gained ground in the US and Europe.

The Xbox360, due to launch in the UK in November, and PS3, which is expected early next year, are being promoted as “entertainment hubs for the home”. While Nintendo has announced plans for the Revolution, its next-generation console, little is known about what it will offer – but it will have to be more than gaming if Nintendo is to stay in the race.

Microsoft and Sony see the future of Xbox and PlayStation as entertainment brands, with functions that go far beyond gaming, while Nintendo says it remains focused on games alone.

Nintendo’s rivals have proved worthy opponents so far and the market leader will need to muster all of its skills to stay in the game.

Investment management company Invesco Perpetual has launched a review of its media planning and buying account, estimated to be worth &£15m. RCL Media, thought to be the incumbent on the business, is understood to be repitching. A spokeswoman for Invesco Perpetual, part of independent global investment manager Amvescap, confirms that media planning and buying are […]

Volvo, the Swedish car manufacturer owned by Ford, is planning to axe 1,500 jobs in a bid to cut &£72m of costs. It is understood that a majority of the cuts will be in Gothenburg, Sweden. The company attributes the job cuts to tougher competition and high steel costs.

London’s tourist board, VisitLondon, launches its latest campaign tomorrow (Thursday), promoting the cultural, sporting and entertainment events taking place in the capital next month. The “London in September” campaign is part of VisitLondon’s &£3.2m investment to attract tourists worldwide to London. It comes after a raft of other activity in the wake the terror attacks […]