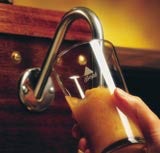 While new year’s resolutions to get fit and stay healthy doubtless abound following the season of festive self-indulgence, those involved in running the UK’s 70,000 pubs will be hoping the public is not going to abandon its taste for alcohol and socialising.

At the end of 2002, several pub chains signalled problems ahead. Fierce competition within the sector – as well as from cinemas and restaurants – over-expansion, high operating costs and a tightening of consumers’ purse-strings in the face of economic uncertainty have all made things difficult.

Talk of a downturn in the pub trade was triggered when SFI Group, which owns the Slug &amp; Lettuce and Litten Tree brands, suspended its shares in November while accounting irregularities were investigated. Over the past few years, SFI had embarked on an aggressive pub opening strategy which left it 120m in debt.

On November 29, JD Wetherspoon – known for its “permanent value offering” and large town-centre premises – issued a warning that profits for the year to July 2003 could be ten per cent below market expectations.

This was followed in December by an announcement from Eldridge Pope that like-for-like sales for the second half of the year had fallen by four per cent – meaning that like-for like sales for the year as a whole fell by 1.1 per cent. Which prompted chief executive Mike Johnson to say the sector might see “a prolonged period of reduced consumer activity”.

Also in December, Wolverhampton &amp; Dudley Breweries released its financial results for the year to September, showing a fall in profits from 76.1m to 74m.

Figures from the Office of National Statistics show that alcohol sales in restaurants, hotels and pubs were flat, at 6.8bn, for the first half of 2002 and experts say they expect the trend to continue into 2003. According to Geof Collyer, an analyst at Deutsche Bank, 12 of the 17 stock market-quoted pure pub retailers had undershot their financial forecasts by 30 per cent or more by the end of November.

Insiders suggest that town centre outlets are suffering the most, as chains slash prices to maintain market share and a fickle public moves on to the next theme or concept bar. Andrew Knight, commercial director of Spirit Group, which owns Mr Q’s and Big Steak Pubs, says: “The carnage is happening in the high street. High investment spending in previous years and fierce discounting are to blame.”

Teather &amp; Greenwood analyst Nigel Popham agrees: “In recent years, there has been a big increase in capacity but operating costs have risen. This is most noticeable in the high street.”

JD Wetherspoon managing director John Hutson demurs: “I don’t think this idea that people have stopped going out in the high street is correct.”

He claims that Wetherspoon’s underlying business is strong, pointing out that in the four weeks to November 24 like-for-like sales at the chain increased by three per cent, with food sales up by 14 per cent and bar sales staying level.

Hutson says that the company’s profit warning reflects the lower margins associated with more labour-intensive food preparation, continued marketing investment and expansion plans for 2003. While Wetherspoon has slightly scaled back its schedule, it still intends to open 60 new outlets this year.

Despite all the doom and gloom created by this run of poor results, analysts say that the pub sector as a whole is resilient, and that those chains operating community pub and food outlets are well-placed to weather any difficulties. Last week, Punch Taverns, whose pubs are mainly off-high street establishments, demonstrated confidence by purchasing 61 community pubs from CI Traders for 26.1m. Meanwhile, Greene King – which has both high street and community pubs – announced pre-tax profits for the 24 weeks to October 19, 2002 up nine per cent to 35m.

Those pub owners which already have a varied portfolio say they intend to concentrate more of their efforts on community watering (c) holes. Wolverhampton &amp; Dudley, which owns the city centre Pitcher &amp; Piano bars, plans to increase its 58 community pubs to 200 over the next three years.

Collyer says that managed pub groups, which have central control over food menus and staff pay and training, “have consistently outspent their cashflow” while tenanted pubs, with individual landlords buying alcohol supplies from the holding company, provide stable cash generation. One senior pub company executive points out that managed businesses, such as Six Continents and Wetherspoon, can find central control a hindrance “when the market moves quickly”. He adds: “If consumers suddenly stop spending money you have got to be fleet of foot to change your business model.”

However, Hutson argues that managed pubs are in a good position to weather a downturn, as they invest in training to make sure staff are of high calibre. In addition, managers can be transferred to pubs that suit their skills best.

Pub companies have become increasingly aware of the importance of customer loyalty and the need for managers to put on more local activities such as theme nights, karaoke and quizzes. Some have even introduced free members’ clubs: in November, SFI launched a sports fan club across the Litten Tree chain, providing preferential seating for the screening of sporting events, discount offers, prize draws and other benefits.

Pubs are also exploring other revenue streams in preparation for changes in licensing laws to allow trading around the clock. Wetherspoon pubs are already opening earlier to serve breakfast and coffee from 10 am.

Looking forward, all eyes are on Six Continents, which runs the All Bar One and O’Neill’s high street chains. It plans to demerge its pubs and bars division from the hotel business in April. Some suggest that, if current trends continue, Six Continents would be better off trying to sell the pubs and bars division rather than risking a separate listing on the stock market.

The next set of trading results following the festive season may well provide an indication of whether consumers are in fact tightening their belts. Spirit Group has already said its Christmas business “was above expectations” and Wetherspoon is expected to make a Christmas trading statement in the next few days. But with two midweek bank holidays, the pub chains could well have experienced an extra lift during the festive season. They will have to wait until the end of January to determine whether they will face the rest of the year with sore heads.