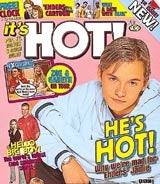 I read with interest – and a degree of bafflement – Ian Tournes’ review of the relative merits of BBC Magazines’ launch of It’s Hot! and EMAP’s Sneak (MW April 11).

It’s Hot! isn’t a gossip magazine and has never set out to be. Yes, gossip is part of the mix but it is a monthly entertainment title for nineto 13-year-olds comprising interviews, features and reviews. Note the age group: It’s Hot! is targeting the younger end of the teen market precisely because nobody is catering for the nine-, tenand 11-year-olds.

They have a voracious appetite for news on music, film and video with the spending power to match, as our advertising bookings testify.

As for marketing – 70 per cent of our target market has actually had the chance to see a copy of the 16-page It’s Hot! sampler, distributed with Top Of The Pops, L&K and Girl Talk magazines, and through the Sunday Mirror. Then there’s the extensive trade and public relations’ activity for launch and throughout the year, together with a considerable spend on covergifts, SMS and web activity.

While it is fun to compare two new teen launches, I’d be more concerned about the pact on the long-established Smash Hits – the 40,000 bulk copies on its current Audit Bureau of Circulations figure show that readers are already giving it a miss at newsstands. And how many younger teenagers have been buying Heat on the strength of coverage of Pop Idol?