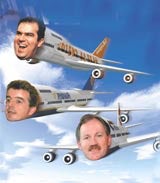 The low-cost airlines are fastening their seatbelts for some turbulent times as they prepare themselves for a dogfight with the established full-price carriers, which are poised to fight back with cheap fares.

However, companies still see myriad opportunities to launch into the sector. Tour operator MyTravel is the latest name to appear on the arrivals board, while bmi british midland (bmi) launched bmibaby in March (MW January 17). MyTravel announcemed it was switching two aircraft from its charter operation to fly as low-cost carriers just a week after easyJet confirmed its £374m buyout of rival Go (MW May 16).

The low-cost sector has been on a roll – driven by businesses trimming back on the travel budget during an economic slump; the burgeoning market for short-haul city breaks and the desire of more adventurous holidaymakers to put together their own vacation packages. The events of September 11 also increased traffic, as people opted to travel within Europe, rather than across the Atlantic.

By contrast, British Airways posted its first loss since privatisation, with a pre-tax deficit of £200m, while bmi posted an operating loss of £12m for 2001. The latter directly blamed the repercussions of September 11, which saw a sharp drop in incoming US passengers transferring to domestic flights. It carried 6.7 million passengers in 2001, down by 400,000.

The original no-frills, low-fares model is Southwest Airlines, which started off in Texas 30 years ago and was the only US airline to post a profit (albeit severely pruned) last year. Economist and low-cost airline expert Keith Boyfield, of Keith Boyfield Associates, lists the important features established by Southwest for a successful

operation: fast turnarounds operating out of un-congested airports and the use of a single type of aircraft to cut pilot training and maintenance costs. Growth should also be organic and with the arrival of the Internet as much business as possible should be driven through this channel. Ryanair best fits the original model among European operators and says 90 per cent of its sales are now online whereas 19 per cent of short-haul BA bookings use this channel.

A question of capacity

Experts believe that there is room for more low-cost players. However, observers do say that the UK is beginning to reach capacity and operating bases will have to be developed in Europe, with Germany, Italy and France the most appealing territories. Ryanair opened up a base in Brussels last year and plans one in Frankfurt this year, while easyJet now has a Paris base.

Richard Carrick, chief executive of MyTravel’s new development division, says: “We still think there is a gap in the market in terms of operating airports in the UK. We don’t think those gaps will be there forever and want to take advantage of them while they still exist.”

To succeed, according to Boyfield, entrants “have to identify the areas of the market not being serviced”, and find locations with tertiary airports. KLM-owned Buzz, flying out of Stansted, has been successful with a strategy of identifying provincial French towns, such as Bergerac in the Dordogne, which are even willing to pay marketing costs and slash airport landing fees in order to attract the tourist pound and subsequent local business investment.

Historically, the sector has seen little head on competition, although Go and bmibaby both started using East Midlands airport in March, duplicating routes. Competition will hot up between the carriers, but, as one analyst explains, there are significant differences between operators, so the battle is likely to be with start-ups from other countries. Boyfield says: “EasyJet is focusing on building up a network of routes and frequency of flights between airports such as Geneva and Amsterdam – the idea is to build a lattice and take share from rival carriers. Ryanair goes to smaller airports and goes for routes that tend to stimulate new traffic of their own. It is not trying to capture a huge portion of the market.”

Experts are viewing new developments with some scepticism. They do question the thinking behind the easyJet-Go merger, and doubt whether full-cost carriers such as bmi and British Airways can effectively muscle in on the market.

EasyJet’s strategy is confusing analysts, as it is veering away from the accepted model. It is developing more flights at congested Gatwick and is considering buying aircraft from Airbus, while its current fleet is made up of Boeing 737s. This could incur greater pilot-training and maintenance costs. The company could also lose focus on its core business as it goes through the integration process with Go.

EasyJet has also invested in an option to buy Deutsche BA, which has never made a profit. Boyfield points out that converting a full-cost airline to a low-cost structure is a huge challenge and the company in question has a history of industrial relations problems.

An easyJet spokesman says that the company is happy with its chosen strategy and adds that the Go acquisition gives the company access to many more airports and expands its pool of trained pilots. The company can also achieve a 30-minute turnaround at Gatwick, which makes the airport a viable base.

Getting the best deal

The spokesman adds that asking Airbus to price a fleet is a way of judging if the company is getting the best deal from Boeing. If the cost of the Airbus aircraft comes in cheaper even including the associated training and simulator costs, then it could be a sensible purchase.

Dan Solon, aviation expert at consultancy Avmark International, says that experience shows established carriers can only provide real competition when they set up a separately branded, low-cost division completely at arm’s length. Otherwise the airline risks taking its eye off the ball, as it juggles two forms of business. And if both operate from the same airport then they will start to compete for each other’s customers.

Bmibaby managing director Tony Davis argues that the bmi subsidiary enjoys the best of both worlds, as it is a standalone company with separate books and contracts. However, he says there are areas “where it makes sense to piggy- back the main company – like engineering support. We are using economies of scale, while existing as a separate business proposition.” He believes the company will break even in its first nine months of operations.

BA set up Go to operate out of a separate airport, with its own dedicated management team. Unfortunately, it decided to sell the airline to a management buyout in June last year, just before the value of low-cost carriers became apparent. Solon says: “I think BA blew it completely. It created and trained a workforce now being taken over by easyJet, one of the two original sources of competition.”

BA insists it will not be setting up another low-cost division, but is restructuring and simplifying its fare structure to capture some of the weekend leisure market. It has produced some aggressive press advertising questioning how cheap the low-cost carriers are in reality, and is trying to drive more booking via the Internet. A spokeswoman says: “What we have not done in the past is spoken up for ourselves. We don’t want to be a low-cost carrier, but we know we have got to compete more than we have been doing.”

Ryanair sales and marketing director Tim Jeans adds that BA fares will remain expensive on any destination where there is no competition from a low-cost airline and says: “It is difficult to see how fare reductions will bring a positive benefit to the bottom line.”

The easyJet spokesman tackles the criticism over fares head on and says that the company’s fare structure is well known – the earlier one books, the cheaper the ticket. He adds: “At certain times BA is cheaper than us, but if you want to fly to Munich tomorrow, and it’s mid-week, you will really pay for it.”

Other factors that could influence growth include the shift to the political right across Europe. This could help the market develop thanks to the anti-protectionist, free-market philosophies of right-wing governments, according to both Boyfield and Solon. However, the political climate could be a hindrance if such governments trade on nationalistic feelings as part of their ideology.

The age of the train?

The development of European high-speed rail, with trains reaching speeds of 200mph, could also develop into significant competition as trains deliver people direct to city centres. The publicly funded French TGV network will link Paris and Strasbourg by a 313-mile line by 2004, with a journey time of less than two-and a-half hours.

Since September 11 there have been casualties among the established national flag carriers, as governments come to realise they cannot keep subsidising unprofitable operations with taxpayers’ money. Boyfield says that the industry speculates on three major European airlines eventually emerging and, until recently, the likely candidates were BA, Lufthansa and Air France – now the smart money is being placed on Ryanair being “the most profitable and strongest” contender. This sounds like an incentive for more companies to enter a growing market – although as one analyst puts it: “Everyone talks about Southwest, but a lot of people who followed went bust. People always remember the winners, but never the losers.”

Now the Diary loves its lookalikes, as all regular readers know. And while this one is, possibly, not 100 per cent credible, that’s no reason not to run it past you. Let’s face it, it can’t be any worse than Communication Team’s dismal forays in these pages (MW ad nauseam). Anyway, here goes. John Hardie […]

Take off your hat and genuflect as the world’s most prominent but wayward brand shows what can be done when it comes to Special Promotion. By Winston Fletcher

The article by Guy Abrahams on the subject of digital TV really hit the nail on the head (MW May 16). We all know that BSkyB has monopolised the digital medium and that ITV Digital was always going to find it hard to compete. Sky could be perceived as the British Airways of digital TV […]