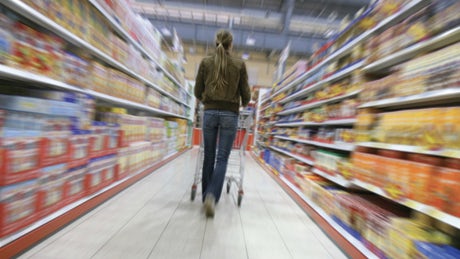 1. No matter the crisis, a strong brand can get you through

If any brand has had a disruptive 18 months it’s the Co-op. As Richard Pennycook, the group’s chief executive put it, the Co-op has had it all: a banking crisis, a drugs scandal, senior execs abandoning ship, a boardroom that leaked information to the press and finally questions over why it even exists. Pennycook couldn’t even score a win with the internal name for the plans to rescue the bank. He called it Project Charlie!

The surprise, said Pennycook, is the impact that has had on the Co-op brand and sales at its biggest business – food. He claims cross-contamination was “less severe that you might expect and almost non-existent in food”, he said while Buzz scores – a measure of the positive and negative things said about the brand – did tumble around key incidents such as when former boss Euan Sutherland resigned, it didn’t translate into sliding sales. The reason for that, he claimed, was the “enormous reserve of goodwill” for the brand.

“When the chips were down, 150 years of behaving in the right way stood for something. We survived through the loyalty of our customers and members and the belief that the Co-op stood for something important they didn’t want to lose from the high street,” he said.

2. Remain in control of your brand

While scandal after scandal hit the Co-op, Pennycook said it remained focused on its long-term brand positioning. For food that meant implementing “True North”, which positioned the business squarely in the convenience sector, introduced new store formats and focused on price with its “Fair and Square” marketing campaign.

“While a fire was raging all around us, we made sure we were implementing a food store strategy that would work in the long term. We used this to demonstrate we were in control of our biggest business and cut through the noise of the crisis to tell a story of improved formats and better prices,” he said.

That is a idea that Andy Clarke, chief executive at Asda agrees with. He said that the retailer winners over the next five years will have a “clear strategy and long-term focus”.

“In such a disruptive environment businesses can knee-jerk into short-term decisions and be tempted to change by the performance of a quarterly number. We are taking a long term view that will give us sustainable long-term growth. But listening to customers is absolutely fundamental to ensuring you have the right strategy,” he said.

3. ‘Bulldoze behind most important brands’

Muller’s chief executive Ronald Kers said it has cut back on brands to focus on the winners, putting all its efforts behind four brands. He said while other companies take a “butterfly approach by doing a little bit here and a little bit there”, Muller “bulldozes”. What that means is putting all its efforts behind the biggest and most important brands, in this case Muller Corner and Muller light. Muller has introduced 100 new products to its three most important brands in the last three years.

“We want to bulldoze our brands and get right behind them”, he added.

Premier Foods CEO Gavin Darby agreed that the focus must be behind the biggest brands but says that the rise of new channels has opened up new opportunities to some of its second and third tier brands and companies should ensure they have their eyes open and can spot a new market opportunity.

“Some of our brands are having a renaissance in channels that are growing fast because they match the consumer demographics online or the cost in convenience is lower. That is turning disruption into an opportunity,” he said.

Most retailers are still just “fiddling around” with new technology, Asda’s chief marketing officer Stephen Smith admitted to Marketing Week and his sentiments were echoed by Tesco. Chief information officer Mike McNamara called out three big technologies he thinks will shape retail over the next five years – wearables, robotics and cognitive computing – but said Tesco is still trialling them to see what might work and what might not. This despite predictions that 250 million wearable devices will have been sold by 2018.

Tesco, he said, is testing Samsung smart watch technology for stock counts while he can imagine intelligent watches, badges and clothes being used as tools to help in-store colleagues improve the customer experience. It has used cognitive computing to come up with new recipe ideas, some of which were even “palatable”. Robotics, meanwhile, means we could soon see robots scouring the aisles for empty shelves, all the while managing to avoid crashing into shoppers and their trolleys.

However, from the talks given by Google and Intel, as well as the co-founder of Natural Machines, which makes 3D printers for food, it seems clear most retailers are yet to be convinced. Certainly they know new technologies are an opportunity, they just aren’t sure how yet or when consumers will be ready for them.

“Amid all the innovation we have to remember what we exist for, our core purpose, to enable the business to deliver a better experience for customers every time they shop with us,” said McNamara. Any technology that can’t do that be given short shrift.

5. Make your brand part of culture

Diageo announced plans in November to increase its investment in making its brand part of popular culture. For example Guinness has seen increased marketing around rugby. While the brand has commercial deals in place, the company’s European president John Kennedy says it also has an implicit contract with consumers, who welcome the brand so long as it brings something “clever, entertaining and apt”.

Kennedy says beyond the official sponsorship, Guinness tries to celebrate the on-pitch game, the character of the players and the fun in and around the stadium. For example, when Irish player Brian O’Driscoll retired from international rugby the brand included his shirt number, 13, in their logo because it understood his importance to fans and other players alike.

“Because we take that approach we are rewarded. We sell three kegs of Guiness a minute during a match at Twickenham and have a 60 per cent share of sales. In pubs it is usually around 7 per cent. That is because of the strong positive association,” he says.