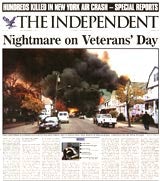 The Independent has axed the position of marketing director, abandoning its search for a replacement for Trish Wadley, following the merger of its marketing and circulation departments.

The marketing team now reports to circulation director David Green. The Independent has been without a marketing director since the sudden departure of Wadley in April, after six months in the post.

The agency’s first work was an outdoor 96and 48-sheet campaign in June, following the redesign of The Independent On Sunday.

Since Wadley’s departure the department has reported to commercial director Stephen Miron. He resigned in October and leaves in December to become managing director of Associated New Ventures.

The Independent has experienced a circulation growth of 1.68 per cent for April to September 2001 which has seen it move up to 228,830 copies compared with the previous year. It experienced a jump of 8.3 per cent in circulation for September on August which may reflect public hunger for serious coverage of international events in the wake of the September11 terrorist attacks.