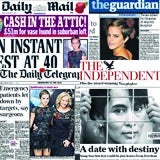 The Independent, now owned by Alexander Lebedev, saw average net circulation drop 0.2% to 182,412 in October, according to latest ABC figures.

The title has also held up well for the six month period May to October, compared with the same period last year. Its circulation is down 3.61% but this compares to The Times falling 14.4%, The Guardian falling 12.9% and The Daily Telegraph dropping 17.11%.

The publisher launched the i on 18 October and is yet to release an official ABC figure for the newspaper, designed as a digest read and priced at 20p. It’s thought that the publisher is aiming for a combined daily circulation of 400,000 for the two titles.

Among quality titles, only The Financial Times saw a lift month on month, up 2.99% to 401,898. The newspaper recently celebrated a 50% jump in digital subscriptions.

The popular market, supported by widespread coverage of TV show The X Factor, dropped year on year by 4.11%.The Sun, still on price promotion at 20 pence in several regions, continued to fall away from its long-standing benchmark of 3 million plus copies. It dropped 2.36% month on month and 2.9% year on year.

Quality Sunday newspapers all saw a fall with The Observer dropping a hefty 17.6% year on year, closely followed by The Sunday Telegraph, down 15.94%.

Read a profile of Andrew Mullins, managing director of The Evening Standard and The Independent, in next week’s Marketing Week.