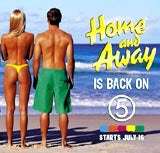 Channel 5, bereft of destination programming, is banking on the arrival of Home &amp; Away to boost its share of viewing.

The Aussie soap, which returns to TV screens after a year’s absence, is expected to do what the channel’s home grown product, Family Affairs, didn’t – act as a major draw and appointment to view.

The key will be to attract a large proportion of the 4 million-plus viewers who used to watch H&A when it was on ITV, before the rights were snatched by Channel 5.

Channel 5 chief executive Dawn Airey hopes the soap will draw 1.5 million viewers and contribute to the channel’s target of seven per cent share of all viewing within five years. The channel had a 5.7 per cent share of viewing for 2000 and 5.6 per cent on average since the start of this year.

Channel 5 suffers from being the poor relation of commercial terrestrial TV, with a programming budget of £140m compared with ITV’s £747m and Channel 4’s £423m (for 2000).

Until last year, Channel 4’s budget was even less – £120m. But following pressure from majority shareholder RTL (64.6 per cent), protracted negotiations and a court case over the funding of the acquisition of movie rights, United Business Media, the other stakeholder, eventually agreed to an increase.

With advertising revenues generally down, it is unlikely that RTL will buy out UBM in the immediate future, and certainly not for the original £500m that chief executive Lord Hollick was asking.

So far, major draws for Channel 5 have been the 9pm movie slot and the international football broadcast.

David Peters, broadcast planning director at Carat, says: “The problem with films and football is they are not a reason to watch Channel 5 on a regular basis. That’s why H&A is really key. If it fails it will be a disaster for the channel.”

Channel 5 will back the soap with the largest marketing spend for any programme since its launch in 1997. Marketing plans include a press and poster campaign created by Walsh Trott Chick Smith, H&A roadshows, a text messaging campaign and the sale of an H&A branded mobile phone.

David Bainbridge, head of marketing at Channel 5, says: “It is an opportunity to get out there and market a known brand. Channel 5 needs to be more salient and top of mind.”

The campaign will also be used as a data collection exercise to enable the channel to text reminders of relevant programmes to potential viewers at a later date.

Once H&A is on air from July 16, viewers will be directed to other Channel 5 programmes through on-air promotions and a change to the schedule. Channel 5’s peak time news bulletin is being moved from its 6pm slot to 7.30pm to make way for H&A. Home &amp; Away will start an hour of soaps, with the hope that viewers will stay with the channel to watch Family Affairs in the second half.

Polly Cochrane, managing director for marketing and commercial development at Channel 4, says: “With key programmes on mass-market TV channels such as Who Wants To Be A Millionaire? and soaps such as BBC 1’s EastEnders, a certain percentage of audience can’t even be bothered to turn over for the next programme, so H&A gives Channel 5 an opportunity to promote its own schedule.”

The soap is also likely to bring in younger viewers and promote a cleaner image.

Andrew Canter, head of broadcast at Media Planning Group, says: “H&A was on TV quite some time ago, so Channel 5 really needs to make a big deal of it. It will make a huge difference, particularly with a younger audience.”

In the past, Channel 5 suffered from a reputation for having an older age profile than ITV and a “sleazy” image because of its late night adult entertainment content.

As a general entertainment channel, it is difficult to become associated with a particular genre, as Channel 4 has, in fact, done with comedy. And unlike ITV, Channel 5 does not have the budget to pay for well-known talent to star in original productions. But it has built up a reputation for making topical tabloid style documentaries on celebrities such as Michael Barrymore, Paula Yates and Chris Evans.

It will be the task of incoming director of programmes Kevin Lygo to use the unspent £6m of this year’s budget to develop much-needed programming for the channel.

Andy Zonfrillo, TV buying director at MindShare, says: “H&A will certainly build up Channel 5’s viewing figures in that early evening time slot, but it is likely to make a minimal difference to overall figures for the channel.”

Industry insiders would have liked to see Channel 5 secure the rights to The Bill, which is produced by Pearson Television – a subsidiary of RTL – but ITV recently renewed its contract.

If Didier Bellens, chief executive at RTL, eventually gets his way and buys out UBM, the fortunes of Channel 5’s programming budget could well change and its share of viewing increase.