There isn’t just a new kid in town, there’s a whole new group of kids in town. They’re called The InBeTweeners (MW last week), and theirs is a transitional age, full of rites of passage, from childhood to teenagedom. But why is this group important? Because the InBeTweeners are today’s tipping point. They are a group teetering on the brink of becoming a teen, with all that entails, while still holding on to the comforting coat tails of childhood. And with current debate focusing on definitions of childhood – and its depletion, commercialisation and arraignment, depending on which media you read – research was commissioned to try to signpost areas that might be of potential value to the debate.

To this end, Carrick James Market Research conducted a qualitative study for Kids Inc among a sample group of 11and 12-year-olds and, importantly, their parents, cross-referencing the findings against Child Track – the quarterly quantitative survey among 650-plus fiveto 14year-olds – with the following results.

Family matters to the InBeTweeners. Both sets of interviewees – children and parents – expressed enjoyment of family time and a “sense of togetherness”, which was also cited as a key source of happiness by the children. Interestingly, given the much-publicised need to be “active”, family time is typically spent on activities such as walking in the park and swimming.

Parents still exert the most influence over this age group, with peers coming second, and many children also cited parents as their main role models. So, as well as being custodians of consumption, the parents of InBeTweeners are also the purveyors of information and influence.

Attitudes towards food were discussed at length, with one of the key implications being that children view themselves as healthy, in terms of their perception of what “healthy” means. For example, 91% and 86% respectively of the interviewees considered their packed lunches and meals eaten at home to be “quite healthy”. Indeed, most were not very concerned about eating too much salt or sugary foods – 53% and 47% respectively which, are in line with CJMR’s nationwide ChildTrack survey results on concerns re. eating too much salt, sugar and getting enough exercise.

But what is key here is that children’s (and, for that matter, parents’) perceptions of food should be an important component of the obesity debate. This research demonstrated that while there is a clear understanding of the idea of “good” and “bad” foods, the actual knowledge of what these terms mean is remarkably shallow: testament to this finding is that children can easily list “bad” foods, but aside from fruit and vegetables, few “good” foods.

The group’s take on obesity was that fat equals being unhappy, being bullied, and possibly death. Given that bullying and the threat of violence was this group’s biggest fear, this illustrates the importance of what message is conveyed regarding obesity, how it is conveyed and, most importantly, how it is consumed and embedded.

The role of technology in the lives of this 11to 12-year-old group centred around the internet for homework and mobiles for communication, although they were not used for socialising or internet access. Blogging and brands’ websites were not used or listed by this group, even though the children’s choice of what they looked at online was usually theirs, although some parents did impose restrictions. What both the children’s and parents’ comments indicate, is a lack of consensus regarding internet access, usage and restrictions among this age group.

Parents were found to be comfortable with technology (43%), but their knowledge of it varied, and games consoles were often cited as areas where knowledge and understanding was completely lacking among parents – 60% said their children knew more about this than they did.

A point worth making, endorsed by other research, is that this is certainly a media-savvy age group and the children’s descriptions of “good” advertising read like a classic advertising brief.

On a positive note, happiness for this age group results from time spent with family, friends and socialising first, and sports and recreational activity second. On the flipside, their fears are both real and surreal: the greatest fear is “bullying and violence” (26%), followed by the dark and fantasma (22%), and also parents splitting up (17%).

The majority of parents questioned felt in control over the children’s food, exercise, influence and information intakes, although the former two did still feature highly on the concern list.

When asked what parents would like their children to do more of, the joint top answers were activities and homework. And, predictably, they would like more time with their children, but there were large variations in the amount of time spent actually doing this.

In all, the research shows parents in the control position that society is undoubtedly most comfortable with; and it shows InBeTweeners to be receptive to positive messages and influences, albeit with insufficient depth of understanding of the some of the key issues.

Plotting the InBeTweeners on a continuum puts them bang in the middle, still playing and listening to parents, but less than in their earlier years, and starting to embrace technology and following their peers. So this is the group that challenges the assumptions brands often make about age groupings, when brand owners might in fact be better singling them out as a significant segment. 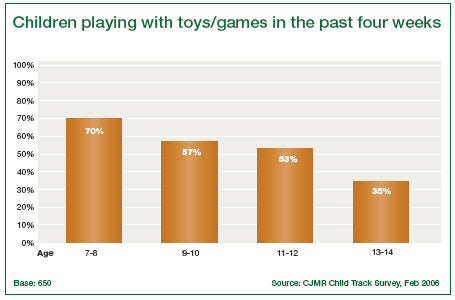