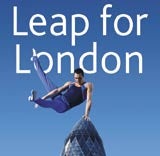 The London 2012 Olympic bid is through to the shortlist of candidate cities of the International Olympic Committee. The news comes as the team unveils its latest ad to support the bid to host the Olympics in London, which shows gymnast Ben Brown on the recently completed Swiss Re building. The print and poster ad is the third of the bid’s ‘Leap for London’ advertisement series, which have included other London landmarks such as Tower Bridge and the London Eye. M&C Saatchi handles advertising for the bid. The London bid is now the second favourite to win, according to bookmaker William Hill, just behind nearest rival Paris. Other cities on the short- list include Madrid, Moscow and New York. The news also triggers &£6m of sponsorship money to help promote the Olympic bid during the next phase of campaigning (MW last week).

Voter apathy has increased, but while during an election people’s interest in politics rises, there is still much to be done to engage the public and get them to the ballot box

EHS Brann has confirmed that it has made eight of the 200 staff in its London office redundant in the past two weeks. There have been no job losses at its Cirencester or Leeds offices.

Formula One racing team Jaguar Racing has begun searching for a replacement to headline sponsor HSBC following a review of the bank’s global sponsorships. HSBC’s contract with Jaguar, which is worth more than &£15m a year, expires at the end of this season. The bank has not yet announced whether it will renew the deal, […]