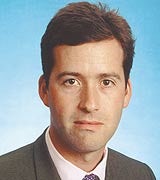 Commercial sports sponsorship is big business. Fifteen global brand names, including Mastercard, McDonald’s and Coca-Cola, each paid a reported &£10m to attach their names to the World Cup. Sponsors of the Winter Olympics in Salt Lake City paid between $5m (&£3.3m) and $50m (&£33m) each for the rights to use those five famous rings.

So, when an organisation tries to gain the benefits of such an association without paying out these significant sums of money, corporate angst among those who have done so is understandable.

“Ambush marketing” has plagued the organisers of major sporting events for years and it is getting bigger as the potential rewards for those companies that can pull it off grow more lucrative.

One man’s ambush is another’s clever business initiative, and some companies have turned it into an art form. There is a temptation to regard ambush marketers as likeable – but essentially harmless – rogues. That would be a mistake. Ambush marketing has a negative effect on everyone involved with an event and, in the end, on sport itself.

Event organisers find the value of their rights diminished. It becomes harder to find sponsors and, consequently, to host events – 43 per cent of the funding for the Winter Olympics in Salt Lake City was raised through sponsorship.

Ironically, some of the ambush marketing campaigns around global sports events can cost companies more than taking up official sponsorship!

There have been numerous examples of ambush marketing: at Salt Lake City, virtually every ice hockey team wore kit emblazoned with the “Swoosh”, yet Nike was not an official sponsor. The same company bought billboard space along the entire route of a London Marathon, spending more money ambushing the event than the cost of official sponsor’s rights. Nike also ambushed Converse, the official Olympic shoe sponsor at Atlanta, by endorsing high-profile athletes and painting portraits on buildings.

While it is virtually impossible to stop companies from trying to ambush an event, there are a number of ways in which organisers and official sponsors can limit the opportunities available.

These include adopting a brand-protection policy, limiting sponsorship through exclusivity in clearly defined categories and pricing sponsor rights reasonably, to allow marketing budgets to absorb both the official rights’ payments and associated marketing at or before an event.

At Salt Lake City, a “cityscape” programme was adopted. Organisers signed agreements with building owners to wrap their properties in banners, preventing them from being used as advertising space.

There is also a battery of legal weapons available to protect such areas as trademarks, design and patents and the use of official logos.

However, with all the fertile minds out there, it is certain that as soon as one loophole is closed, someone will be trying to exploit another.

Patrick Elliot is a solicitor with the sport unit of Addleshaw Booth, official lawyers to the Commonwealth Games 2002 in Manchester