The “Quote Me Happy” campaign run by Norwich Union, almost without peer in its cringe-making asininity, reduced me to chewing the carpet, an affliction lifted only when the ads miraculously abated. Now they have returned and once again the Axminster is frayed at the edges. The soft-focus BT campaign featuring that flesh-creeping couple: the dopey straw-haired male and his live-in female “partner” whose every doe-eyed glance radiates vacuity, cause my blood pressure to rise alarmingly and my teeth to grind with a jaw-wrenching savagery.

If advertising can harm the health and wellbeing of those at whom it is directed, what of those who do the directing? On those untoward occasions when my finger is slow to reach the mute button and my eye to look the other way, and I see the ads in all their infantilism, I am powerfully persuaded that the minds who conceived them are in some dreadful way retarded.

Terrible to relate, the effect may be lasting and the ailment without remedy. Admittedly, the evidence rests on just one case study, but it chronicles an affliction so striking in its intensity and so tenacious in its hold, that it should be a warning to all.

I speak of Charles Saatchi. Those of us who have followed his career always marked him out as odd. After all, a go-getting adman with boundless ambition who affects the life of a hermit is either suffering from a curious, inverted form of attention-seeking or is weird in some other unspecified way. There is megalomania there, too. When Charlie and his brother Morrie decided the time was ripe to acquire the Midland Bank, some of us thought it would not be long before they were both admitted to the Sunset Home for the Terminally Bewildered. As it happens, only Morrie came near to that fate when he entered the House of Lords.

Some trace Charlie’s malaise to his early work in the creative department of the agency that the brothers founded. It was there that he penned an ad on behalf of the Health Education Council in which, with what seemed at the time an unnatural relish, he described what a fly does when it settles on food, namely vomiting, stamping, sucking and defecating. On behalf of the same busybodying client, he deftly switched from the incontinent habits of flies to those of humans, and devised an ad that promoted contraception by portraying a pregnant man.

Such is the resilience of the human mind that it is quite possible for it to emerge unscathed from the conjuring of nightmarish visions. In Saatchi’s case the evidence, alas, points to the contrary. For, having made a fortune from advertising he began, slowly and tentatively at first, but later with an astounding voracity, to acquire works of art. This was not art, however, as understood and appreciated by people whose taste runs to the aesthetic. Far from it. This was conceptual art, which is pseud-speak for attention-seeking tat.

Through his patronage Saatchi is credited with the creation of Britart, a generic term for the self-regarding, art school graduate creations of a young generation of poseurs intent on shocking the public. Damien Hirst’s tiger shark pickled in formaldehyde, and Tracey Emin’s unmade bed were among the creations of this slender and shallow movement. Their desire to shock was indistinguishable from that of the three-year-old who shouts “bum poo” and excitedly awaits the adults’ reaction.

These sub-artists, however, awakened a response deep in Charlie’s subconscious. It was not hard to see why. Britart’s stock-in-trade, its methods and its materials, were vomiting, stamping, sucking and defecating. Mirabile dictu, they were talking his language, evoking his past, sharing his bleakness. He couldn’t buy enough of the stuff, and, somewhere along the way, he also acquired Nigella Lawson, another item of pure artifice – this fashioned by herself and for herself.

The most recent development in this sorry progress was the news that for nine months (eerily the span of a pregnancy) Charlie had subsisted entirely on a diet of nine eggs a day. Medical opinion attests that among the effects of this absurd regimen is a morbid and noxious flatulence. In those words lie the making of an epitaph. 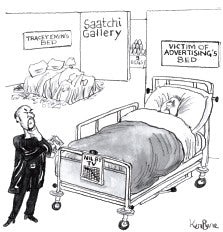