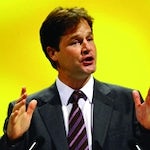 The Liberal Democrats are struggling in the polls now that that they have lost their “challenger” brand status but must continue to highlight their policy differences as well as their successes in Government if they are to stop their brand being diluted, according to political marketing experts.

One hundred days on from the formation of the UK’s first coalition Government in over 60 years, junior partner the Liberal Democrats find their poll ratings in steep decline with some political observers predicting election difficulties next time out.

Just three and half months ago, Nick Clegg left the stage at the end of the first televised leaders’ debate in April the man most likely to give the Liberal Democrats an electoral break through. His decision to position his party as a fresh alternative to the tried but not trusted main parties looked like a winning one.

The Liberal Democrats’ poll ratings soared with his competitors for the top job and the whole country “agreeing with Nick”.

What transpired turned out to be a political break through of sorts but not one that many Liberal Democrats had imagined – a coalition with the Tories.

It has also led to a change in poll fortunes. The party’s support has fallen to just 12%, according to a recent YouGov poll, half the level the party secured in the general election.

It is said supporters are uncomfortable with the number and kind of compromises the party has had to make in coalition with the Tories.

The Liberal Democrats are also struggling to come to terms with no longer being a “challenger” brand, according to political marketing experts.

Trevor Hardy, founder of creative agency The Assembly, which worked with the Liberal Democrats before the election, says the party needs to play a “long-game” by using their record in government to position themselves as responsible leaders.

“The party has always been in opposition but they are no longer a challenger anymore. They can use the current situation to show how they can change things. But the biggest challenge will be how do you remain distinct as part of a coalition?”

Hardy says the party needs to use future marketing materials to highlight the issues where its positions are distinct. He adds that a focus on what its MPs and councillors have achieved on a local-level, grassroots politics being a traditional Lib-Dem strength, will also help position the Liberal Democrat brand apart from the opposition.

Mark Cridge, chief executive of glue Isobar, which worked on the Green Party’s election campaign, agrees that “local party engagement” should be a focus but thinks the party’s task could be too great.

“It is difficult for them to come back from this. The Liberal Democrats’ success at the ballot box was wrapped up in the personality of the leader as an agent of change. However, they can’t stand up and go back to that old position. It’s [the coalition] a massive price to pay”.

The Liberal Democrats will start their annual student recruitment drive during fresher’s week next month. The party’s opposition to the war in Iraq and its leaders’ relative youth has made it popular with young adults in recent years.

A spokeswoman for the Liberal Democrats insists students and others will see that the party still offers a clear alternative.

“We have no difficulty in positioning ourselves. We still have party positions and some feed into the coalition but we still have policy positions that might be different”.

She adds the upcoming party conference will serve as an opportunity to debate and set party policies.

The annual get-together in Liverpool next month is the party’s first opportunity to position itself to members and the electorate.

The Deputy Prime Minster will no doubt be lending thought to how best to approach that challenge. As difficult, some might say, as his current task – taking over the day-to-day running of Government during the Prime Minister’s holiday.