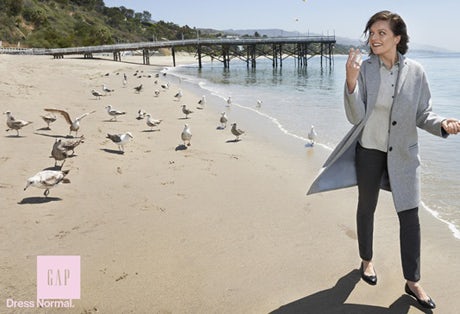 Gap has decided to celebrate the very thing that some critics have said it suffers from being – normal . The US retailer has responded to the threat posed by Uniqlo, H&M, Zara et al by launching a campaign that celebrates dressing normally.

Pressing home the normal positioning, the ads feature some of Hollywood’s more credible stars, Angelica Huston, Michael K. Williams and Elisabeth Moss who are all known for, you guessed it, “dressing normally”.

Pushing normal as desirable is a challenge. In a statement the retailer appears to be suggesting that being normal is the antithesis of, err, normal. CMO Seth Farbman attempted to explain: “Finding your own version of ‘dress normal’ is an art – my normal is different from your normal, and that’s the essence of the campaign.” Got it?

Brands looking to utilise the new digital channels on the block

Snapchat is said to be preparing to expand its offering to take in advertisements and content . According to the Wall Street Journal, the ephemeral photo and video messaging app is to serve up news, TV clips and advertisements.

More than a dozen media companies, including MailOnline, have been in discussions to provide content for Snapchat Discovery, it was reported. It’s not yet clear how advertising would work, but it is likely to come in a native form of pre-roll before the content is served up or sponsored content.

Elsewhere, music streaming service SoundCloud is introducing advertising and subscriptions . Red Bull, Sonos, Squarespace, Jaguar and Comedy Central are among the first brands that will place audio/image ads ahead of licensed content from partners including Sony/ATV, comedy site Funny or Die and some independent artists such as GoldLink.

FMCG sales are growing at their slowest rate for five years in the UK , rising 1.2 per cent year on year in the second quarter, below the 3.8 per cent growth seen across the rest of Europe. Nielsen, which conducted the research, says the numbers indicate that consumer spending in the UK remains weak despite an improvement in the economic outlook.

It seems less is being sold but the drop in volume sales is not yet being accounted for by higher prices. Volume sales declined 1.1 per cent in the period, while price inflation in the UK was up 2.3 per cent.

Danish audio company AIAIAI reckons consumers are more likely to climb Mount Everest or survive a plane crash than click a banner ad. That’s why it decided to create one that web users can’t resist but play with. The Stones Throw scratch banner allows users to transform themselves into a DJ by scratching on a turntable – and of course, they can click through to buy some headphones if they really want.

The fast food maker’s major foray into the retail sector takes place next year when it rolls out its coffee brand in partnership with Kraft Foods nationwide across the US. It includes the ground and whole bean McCafé coffees as well as single-cup pods that can be used in at-home coffee machines.

Consumers will be able to purchase the bags through grocery and wholesale retailers, while they will also be served at McDonald’s restaurants. The coffee will be sold in several variants including Premium Roast, Breakfast Blend, French Vanilla and Hazelnut with pricing expected to be inline with the $7.29 (£4.38p) used when it was trialled earlier this year.

The Facebook-owned photo-sharing app has created a suite of advertising analytics tools, offering a deeper view into how branded paid and organic content is shared on the site. Account Insights, Ad Insights and Ad Staging are currently only available to a select group of advertising partners, but they are expected to be made available to all marketers in the coming months.

Now I know I’ve ‘made it’ in OK Magazine with @jonmew & @haynetta @IABUK Content Conference. Look out Celeb Big Bro!

I’ve started to get those random tweets from people I don’t follow. Not happy, @Twitter. Please ditch this

@BenAyers – Blinkbox head of comms on The Sun’s paywall

OK how long until the Sun gives up on this paywall? I give it 3 months. It will be before they drop page 3, for sure.