British Airways was hoping that its “Magic of Flying” campaign would have the “wow” factor. No evidence of that but going by the reaction on Twitter to news of the activity it has certainly captured the imagination with the broad reaction being “that’s cool”.

The science bit. The ads are located on digital billboards in Chiswick and Piccadilly and interact with aircraft in the sky. Technology tracks the aircraft and interrupts the digital display just as it passes over the site, revealing the image of a child pointing at the plane, accompanied by its flight number and destination it’s arriving from.

As they say, “cool” imaginative use of new technology entirely relevant to the brand and placed in entirely the right location (Chiswick is on the Heathrow flight path and Piccadilly on the tube line to the airport). It cannot fail to reflect well on the brand.

It’s still early days, but so far Sainsbury’s seems to be winning the Christmas ad battle. The supermarket’s campaign promotes its 50-minute film, which features footage from customers and was edited by Oscar-winning director, Kevin MacDonald. The use of long-form content is a change in strategy for Sainsbury’s and one that it hopes will give it the edge in the run-up to Christmas.

Barely a week after it launched, the campaign has already helped boost perceptions and buzz around the Sainsbury’s brand, according to figures from YouGov BrandIndex. It has also created the most “social media buzz” of the big four supermarkets’ efforts, according to communications agency Way To Blue.

The proof of success for any marketing campaign is an uplift in sales and we’ll have to wait until the new year for that. But YouGov figures show that “propensity to purchase” at Sainsbury’s is up among consumers, suggesting the firm’s gamble might well pay off.

Nike was dealt a blow this week in its ambition to overtake Adidas and become the world’s leading football brand when its arch reveal announced an extension of its sponsorship of the World Cup until 2030. That deal lets Adidas sell exclusive products under license and it has already revealed its new “Samba Pack” line of football studs, the first in a wave of merchandise from shirts and match balls to clothing.

Nike currently trails Adidas in terms of sales and share of football apparel and equipment but it is gaining. Adidas posted a 7 per cent year-on-year drop in revenues for its latest quarter, while Nike’s sales increased 8 per cent. Adidas is relying on the 2014 World Cup to boost its performance, increasing investment in marketing its football offering.

Famed for his aggression and killer instinct, Mike Tyson is the subject of a heart-warming ad by Footlocker.

The ad, launched to commemorate Footlocker’s “weak of greatness”, is a tongue-in-cheek slot depicting both heavyweights from that infamous 1997 bout when Tyson bit Holyfield’s ear bury the hatchet with a hearty embrace.

In the pantheon of sporting rivalry, no two nations square up in such a way as England and Australia when playing cricket. And with the Ashes getting under way in Australia earlier this week, fast food giant KFC has temporarily changed its ‘native’ brand colouring of red and white (the colours of England) to the green and gold of the host nation. As of today (22 November) Australia are on top in the first test so the Colonel appears to have backed a winner.

ONE TO WATCH: Pop-up stores on demand

With the high street in decline, the potential for short-term, opportunistic marketing via the medium of pop-up stores has never been greater. And to capitalise on this phenomena a start-up company called Appear Here has emerged offering brands a marketplace where they can bid for short-term retail space. Founded by 21-year-old entrepreneur Ross Bailey, Appear Here hit the headlines earlier this week after it raised £1m in funding from Howzat Partners and MMC Ventures Forward Investment Partners. The online marketplace for retail space claims to have signed up 3,000 brands and retailers to its platform. 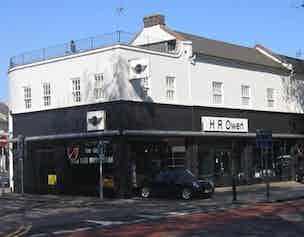 I was very lucky in being brought up properly – if someone holds the door for me, I say thank you; if someone asks me for a favour, I do my best; and if someone writes to me, I will usually respond.