Nike beat rival Adidas to the World Cup punch this week when it launched its Brazilian-themed football spot just days before the latter unveiled its own effort. The “Dare to be Brazilian” advert features the crème of the country’s footballing talent including Barcelona’s Neymar and Chelsea’s David Luiz performing a flurry of tricks as they take on another team. Scenes flick between animated sequences to showcase the flair on display as Nike looks to reinforce its deep-rooted ties to the country’s national team. With Adidas’ World Cup campaign now officially underway, only time will time which one comes out on top next summer.

Retailers got a boost when Chancellor George Osborne announced some relief from business rates, capping increases at 2 per cent and cutting them in half for businesses moving into vacant high-street shops. The move means a real-terms reduction that should help retailers struggling to compete with online rivals and weak consumer spending.

Despite improvements in the UK economy, UK households continue to face a squeeze as wage increases fail to keep up with inflation. Figures from Mastercard show that retail sales growth was 1.5 per cent year on year in November, below the average 2.3 per cent increase so far in 2013.

Nevertheless, Christmas sales are expected to offer some cheer, with Deloitte forecasting total spend will top £40bn this year, up 3.5 per cent.

Phone companies are under fire for not doing enough to help customers block nuisance calls. A report by the Culture, Media and Sport Select Committee dubbed nuisance calls the “bane of millions of people” and said telecoms firms should be forced to offer services free of charge.

BT was singled out for criticism by the MPs for charging £1.75 for caller displays unless customers take out a 12-month contract. They said they found the justification for the charge “totally unconvincing”. The Government is launch a consultation on regulations around nuisance calls in the new year.

Earlier this week, the world’s largest social network launched a centralised hub containing information for marketers about using Facebook in 11 languages. The site has been designed to meet the needs of marketers in small enterprises and larger outfits. The hub was designed to scale how Facebook communicates with marketers globally and is now available in: Korean, Japanese, Taiwanese Chinese, Simplified Chinese, UK English, German, French, European Spanish, Italian, Brazilian Portuguese, Latin American Spanish

Disney shut down its own-branded US mobile operator business in 2008 but it hasn’t lost total interest in being on consumers’ devices. The media giant this week unveiled plans to customise a series of devices with Disney games aimed at children that will be distributed by US mobile operator Zact Mobile.

More confusion over native advertising. The FTC held a conference examining the emergence of native advertising this week with the chairwoman of the US regulator Edith Ramirez offering the vaguest of guidelines. She said: “While native advertising may certainly bring some benefits to consumers, it has to be done lawfully.” But she then went on to say that it wasn’t currently contemplating specific regulation. With the IAB US setting up a Native Advertising Task Force to ward off any such regulation, don’t expect any clear guidance on the matter any time soon.

@cluedont – comedy tweeter on Mars’ current TV advert
Have you ever noticed how shit the three penalties are in that Mars advert? The keeper’s got very little to do with it really.

@nwalley – managing director of media consultancy Decipher on marketing jargon
I think that ‘gamified’ may have taken over from ‘programmatic’ as my most hated advertising buzz word! #ftvads

@MarketingMog – marketing consultant on one of Aldi’s Christmas ad spots
The Aldi champagne ad is so disappointing. Couldn’t we have a nice male hunk without him being ridiculed? Also rips off of an old Boddies ad 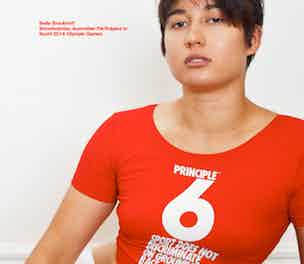 American Apparel has partnered LGBT campaign groups All Out and Athlete Ally to sell a clothing line challenging what has been described as Russia’s “anti-gay laws” ahead of the Sochi 2014 Winter Olympics.