Slowing sales in emerging markets and tougher competition in mature countries heaped pressure on marketing to deliver results in 2014. Budgets were under greater scrutiny as a result, leaving marketers to solve the conundrum of which brands to prioritise in which markets and how to create a compelling message using the right channels.

It led to brands becoming “too quantitative and too cost-control focused”, according to WPP chief executive Martin Sorrell. It also convinced Coca-Cola and Mondelez to implement cost management initiatives designed to make cost-reductions sustainable.

The shift in thinking is also changing how senior marketers view their agency relationships. Publicis chief executive Maurice Levy acknowledged the impact when he admitted agencies were under threat from consultancies such as Accenture and Deloitte, which are able to offer a wider breadth of operational services beyond traditional creative campaigns.

The year of mobile accountability

Could marketers’ enthusiasm for mobile be slowing? That is what a global survey of CMOs from the CMO Council suggested. Its report found that 52% of marketers were planning either no change or a decrease to their mobile marketing budgets with just 48% planning an increase. That was s a significant slowdown on 2013 when 62% expected to increase their budgets.

The reason behind the slowdown appears to be a concern over accountability and how mobile links to the rest of the marketing strategy.

That doesn’t mean mobile ad spend is dropping just that it is experiencing “growing pains” as marketers struggle to prove ROI. Tech and media companies need to provide better accountability and measurement options.

That is coming. Both Facebook and Google, two of the biggest mobile ad players, have introduced new attribution models and ad formats while initiatives around beacons, online video and native content will quicken the pace of data collection.

However, as Mondelez’s European media director Gerry D’Angelo put it, the key for brands is still to experiment to see what works and matching it to data granularity.

Getting the right balance between local and global marketing has long been a challenge for marketers but in 2014 it seemed a more global outlook was winning out. SABMiller switched from regional to global initiatives in a move it claimed would allow best practice to be shared more effectively. Diageo also pulled regional marketing teams from its emerging markets to streamline operations as part of a £200m cost-cutting drive.

Mondelez, Pernod Ricard and Reckitt Benckiser also overhauled their internal structures with the aim of helping local marketers by communicating very clearly the ultimate global brand direction. Most brands admitted they weren’t on top of their game when it came to rolling out successful global brand initiatives or spotting where local activations could work internationally. The shift should help to clarify roles and responsibilities, reduce duplication and lead to a more consistent marketing message.

Loyalty moves away from points

This was the year loyalty moved away from points and towards rewards. Waitrose has lauded its scheme, which offers free coffee and newspapers, claiming it is “more than washing its face”, costing less than 1% of revenues to run and leading to an uptick in visit frequency and basket size.

The cost of running programmes like Clubcard has started to be a drain. Analysts estimate Tesco spends around £500m annually on running Clubcard, before it even counts the estimated 1% of sales it gives back to shoppers in rewards. Sainsbury’s and Tesco might credit loyalty data for helping them personalise marketing and boost sales, but the balance of that pay-off is starting to tilt away from points.

Nectar halved the number of points it gives out, moving instead to focus on targeted promotions. Morrisons’ new loyalty card does offer points but on fuel and purchases of promoted products. Lidl, Aldi and Asda eschew loyalty programmes altogether, insisting that instead customers want straightforward low prices.

Given that they and Waitrose are seeing the best performance in the supermarket sector there seems to be some merit to that. Tesco will not get rid of Clubcard, the data is too valuable, but expect a shake-up as chief executive Dave Lewis works out what loyalty means in the new era of grocery shopping.

It all looks very easy. A random member of the public starts a social media campaign with a catchy hashtag and a related charity spies the opportunity, jumps on board and awaits the influx of cash.

In reality it is much more difficult than that. Cancer Research UK managed to raise £8m from #nomakeupselfie but it had to do some hard graft, making sure its messaging was relevant and it made it easy to donate. Macmillan raised more than £3m from the #icebucketchallenge but risked a hit to its reputation as people accused it of jumping on another charity’s campaign. There are both opportunities and challenges.

Plus once the campaign has fizzled out the work isn’t over. Kate Collins, director of marketing and fundraising at the Teenage Cancer Trust which raised £5m through the Stephen Sutton social media campaign, says while the charity saw a huge awareness boost it has had to work hard to ensure it doesn’t lose that momentum by using data, digital and direct marketing to talk to new supporters and explain its future needs.

Other charities are looking to see how they can find their own viral campaign, investing in digital and changing company cultures to become more proactive. There can be long-term benefits, but it must tie into the wider needs of the charity.

John Lewis, Unilever, Mondelez, McDonald’s, Tesco, the list goes on. It seems every big household name wants to be working with the startup community.

The benefits for both sides are clear. For the startup they gain access to the resources of a big brand plus the kudos of having a hosehold name on board. For brands there’s an opportunity to find out what is happening at the cutting-edge of innovation for relatively little money while at the same time boosting their cool credentials.

This is less about working with startups on ad products, like the early tie-ups, and more about finding ways they can work together. Unilever tapped NewAer as part of its Go Global initiative to develop a mobile app that users beacons to deliver targeted messages to people as they buy ice cream. John Lewis is working with the winner of its startup competition, Localz, again on beacon technology.

This is an admission by big brands that they cannot do everything themselves and as digital marketing rapidly evolves they might need some outside help. The brands that can use that to come up with innovative and interesting ways of reaching customers will win out.

Programmatic spend was up 61.6% in the UK in the third quarter, according to Standard Media Index, which measures agency spend at five of the big six media holding agencies, and brands are upping their programmatic targets. Google wants to sell 60% of its digital marketing budget on programmatic. At P&G that figures is 70%.

Publishers are also on board. Channel 4 has announced plans to sell ads on its upcoming “All4” video-on-demand service programmatically while Apple will let advertisers buy ads on iAd programmatically.

The future seems to be automated but there are still concerns around a lack of transparency, control of data and the role of creativity in this new world. They need working out before the full benefits of programmatic will be felt.

Zoopla’s failed attempt to push Premier League club West Bromwich to condemn striker Nicolas Anelka’s controversial ‘quennelle’ gesture and subsequent decision to terminate its sponsorship demonstrated the length some brands are now willing to go to push their ethical values. More recently, FIFA sponsors including Coca-Cola and Visa have slammed its handling of corruption charges surrounding the 2018 and 2022 World Cup competitions in an attempt to not appear to be condoning its actions and limit any negative fallout for them.

However there are still times when sponsors choose not to speak out. Winter Olympics partners such as Samsung and Coca-Cola failed to act against the anti-gay laws in host country Russia, instead deferring to the International Olympic Committee.

The moves suggest there is increasingly a commercial value to taking the moral high ground for brands, but only if the PR rewards outweigh the risks. For Zoopla, it probably received more publicity around the decision to end its West Brom sponsorship than for the whole time its name appeared on West Brom shirts. For World Cup sponsors the allure of one of the world’s biggest sporting events is too great to do much more than speak out.

Video bloggers are the new online celebrities and brands are jumping at the chance to use their influence, particularly among younger consumers. A survey from ICM commissioned by Marketing Week found that nearly a quarter of 18- to 24-year-olds follow a “vlogger”, with their influence particularly felt in the beauty market.

However, there are challenges. Oreo recently had its YouTube ads banned by the advertising regulator for not clearly labelling them as a promotion. That prompted a change in CAP guidance, with brands now needing to make a “clear distinction” between adverts and editorial content rather than vloggers being able to announce within the content or via a written disclaimer below the video that it is a promotion.

It is no surprise brands want to jump on the interest in vloggers who have a unique relationship with their followers. It is also cheaper that putting stars like Justin Timberlake into ads. However, as with other advertising, rules apply to make sure brands don’t mislead consumers.

Vloggers have built up their followings by being authentic and honest. That applies to their deals with brands too.

Selfies at first appeared to be a passing fad but as 2014 wore on and they showed no signs of disappearing brands looked at how they could leverage the trend for their campaigns. Samsung had the most obvious success. Ellen Degeneres’ Oscar selfie became the most retweeted photograph ever on Twitter and Publicis Group chief executive Maurice Levy, whose buying arm Starcom brokered the deal for Samsung sponsorship of the Oscars, claimed it was worth $1bn.

Other brands have integrated selfies more formally into their campaigns including GoPro and Turkish Airlines, which hired Lionel Messi and Kobe Bryant for a #selfieshootout competition where fans could win a free flight. Marc Jacobs used Twitter and Instagram selfies to give its Fall 2014 campaign a social twist.

The #nomakeupselfie also helped raise £8m for Cancer Research UK despite the charity not actually being behind the campaign.

WPP chief executive Sir Martin Sorrell has warned companies that the rush to “cut your way to growth” is handing too much power to procurement teams when it comes to advertising budgets, a shift emblematic of marketers becoming “too quantitative and not qualitative enough”. 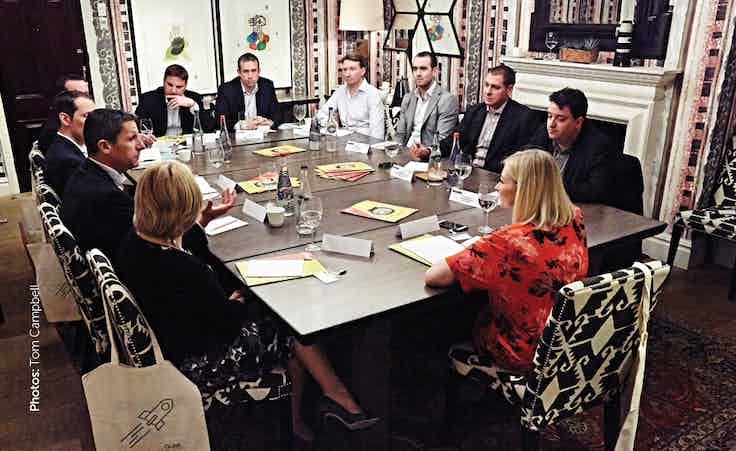 With consumers expecting the same multichannel service from their financial provider as from retail brands, and new entrants better able to deliver those needs, the sector faces substantial challenges. Our panel of experts discuss the best way forward.