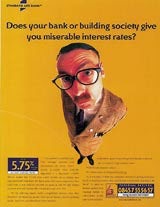 When Edinburgh’s Union agency asked photographer Richard Mountney to quote for shooting a new Standard Life Bank print campaign, he really got involved in the idea.

Unbeknown to Union, Mountney transformed himself into the central character, a nerdy high street bank manager, and sent the result to Union creative director Andrew Lindsay, together with his quote.

The transformation was so complete that Lindsay did not recognise Mountney, but was impressed enough with the photographs to use the nerd impersonator in the agency’s ads for the bank.

Mustoe Merriman Herring Levy has been appointed to handle the UK Website launch for The Street.com, the US Internet financial news service. Mustoe Merriman pitched against four other agencies to win the account, which could be worth up to £5m. It pitched with Motive Communications, which was awarded the media account. It will be briefed […]

A US company specialising in one-off, specialised billboards is to open an office in London led by former More Group and Mills &amp; Allen director Michael Higgins. New York-based Van Wagner offers advertisers a small number of big, attention-grabbing sites in key locations such as Times Square as a foil to national or regional poster […]