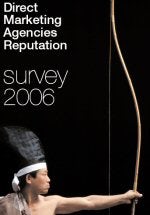 Normal service has been resumed. For many years, clients have named as their favourite agencies start-ups with funny names, digital shops on the information superhighway to failure or integrated agencies in which the partners were not actually on speaking terms.

This year’s Direct Marketing Agency Reputations Survey, sponsored by Direct Recruitment, proves that tradition is the new innovation. Nowhere is this more evident than in agency names – nearly half feature their founders’ names, either in full or in initials. It may be a small point, but it is an illuminating one. If you do good work, you should put your name to it.

The list is particularly notable because it closely matches the sort of top 20 that most people in the DM industry would sketch out on the back of an envelope. These are the agencies that made the business what it is – and that are clearly still leading the way.

Beneath the surface, however, tradition is harder to find. The names may be the same, but the activities being carried out are a very long way from what the founders would have undertaken. From digital marketing via e-mail and search engines to website design and mobile marketing, electronic media are now firmly entrenched in the DM world.

Don’t be a Stranger
This is particularly evident at this year’s most favoured agency, OgilvyOne Worldwide London, which was ranked first in five out of the eight criteria. Named for the man who coined the phrase “never sell to a stranger”, it has fully embraced the most targetable of all media.

“Direct marketing is changing, perhaps more now than in previous years, because of digital and client demands at the high and low end,” says managing director Mike Dodds. “To match all that is quite a feat – it requires a lot of plate spinning.”

One of the ways the agency has responded is by putting 150 people through its Digital Academy, putting new media knowledge and skills at the heart of the business. “Digital work is accounting for more and more activity – 50% of the briefs we see are interactive,” says Dodds.

He notes that direct marketing is still at the foot of the growth curve for digital. “In the UK, 25% of people’s time viewing media is online, but only 5% of advertising spend is allocated to it. There is a way to go,” he says.

This has been reinforced by senior hirings, such as John Baker, head of interactive (who signed from Proximity), Brian Jensen, head of experience planning (who joined from Agency.com) and Jethro Ferguson, who leads the American Express interactive business and brings 17 years’ experience from New York. 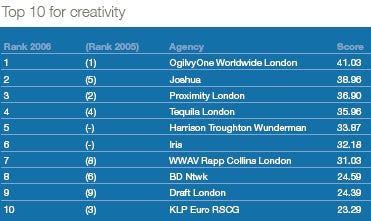 Redworks for Going Faster
Another innovation is a new working process, called Redworks, which provides a fast-turnaround, low-cost approach to creative work for tactical activity. Even on global accounts, there is often a large amount of relatively basic communication that needs to take place rapidly. A common complaint among clients has been that the core agency process is simply too slow and expensive in such cases.

OgilvyOne is required by its parent company to have at least 50% of its business from local accounts, rather than international clients. In London, this means everything from BT – probably the largest of all local clients – through to Waterstones and the Arts Fund.

Managing such diverse activity is a challenge in itself, but Dodds believes this year’s performance in the survey is largely due to his senior management team. “It has been a good all-round performance for us this year,” he says. One of the earliest adopters of a non-individual-specific name – Joshua – has avoided the fate of most agencies that followed suit by being both a business success and rising even higher up the reputations survey this year. Since entering the top ten three years ago, the agency has marched up the table to reach third position.

Joshua chairman Peter Thompson says it is not just the name that is not specifically aligned. “Although a large part of the work we do is direct, we are very integrated. A lot of our success is through this way of working coming into its own,” he says. That means data-driven direct work as well as sales promotion activity. This is very evident in the Nescafé work it created, for example.

“Marketing is now very diverse and there are many problems for clients. We need to find the best way to make a sale. That is the core of our approach,” he says. “We are known by clients to have a very collaborative nature. No individual person has all the answers – all functions have to work together as skill sets don’t sit in one place.” 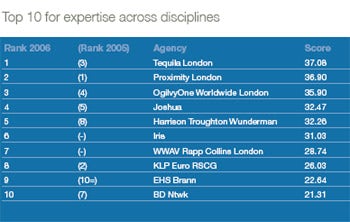 On the Wall
As well as its Planning Village, which it introduced four years ago, the agency has adopted a teamworking approach in its creative department, which it calls The Wall. Clients are able to interact with creative teams in a way that is not usually seen. “It seems very naive to me to keep creatives holed up in a back room. The more they interact with clients, the better,” says Thompson.

Benefits of this approach include being appointed by Pedigree two years ago, when the client handed work on seven brands to the agency. “To bring that all together for the client and to work with the above-the-line agency has been a journey for the organisation,” he says.

Joshua is not the only agency where this type of shift is taking place. In a year when outfits with names above their doors scored well, the paradox is that individuals are probably less important to successful agencies than ever.

WWAV Hello
Perhaps more than any other agency, the absence of WWAV from the Top 20 until three years ago was surprising. But as much as it helped to create the template for direct marketing in the UK, the business has now moved on. Its rise up the top ten is evidence of how version 2.0 of the agency is beginning to achieve cut-through.

“Everybody likes to have a pop at us, like they do at Chelsea or Manchester United,” says Scognamiglio. That may be why the agency has been able to pick up fistfuls of international awards for its work, such as Echo and John Caples citations for Orange Broadband and NSPCC, but has been less favoured domestically. “We will start to see that happen in a year or two,” he says.

New business gains this year from Sony and Barclays, plus two yet-to-be-announced wins in the past week, have compounded the success the agency had last year in picking up Capital One, Somerfield and Unicef.

Scognamiglio adds: “We have not lost a client this year, whereas two or three years ago, we were haemorrhaging clients because we were focused on the wrong thing – the agency, not the client.”

Senior hirings, such as head of planning Gavin Hilton, are helping to change the perception of what type of agency WWAV now is. Integration of digital across the business has also transformed it. And with the unique presence of a media department, WWAV can justifiably claim to be the biggest DM agency in billing terms. 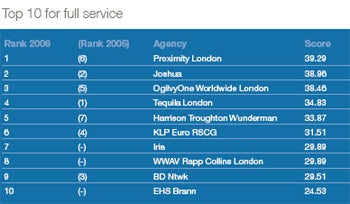 The Real Point
Reputations are often made through winning awards as much as business. Yet it is only now that Craik Jones Watson Mitchell Voelkel is making a real mark in this survey, despite picking up 180 awards over its 15-year life – more than any other DM agency.

That hit rate has continued this year, with 28 more awards so far, plus one D&AD pencil to its name. Managing director Fiona Scott says: “As an agency, what is important is doing effective work. We never sell anything to a client just because we think it will win us an award. But if it does drive results, it is nice to get an award for it.”

New business has also been on an upward trend this year, with an additional 8.3% growth year on year worth about £6m, combined with strong organic growth from existing clients. Together with its creative reputation, Craik Jones benefits from good client retention, holding Bells, Orange and Unilever for five years, RBS for seven, First Direct for 14 and Land Rover for 15.

Long-term View
“Sixty-five per cent of our clients have been with us for six or more years. Our focus has been to find great clients with great brands and really service them,” says Scott. Boosted capabilities in the digital space, which now contributes 22% of the agency’s income, have helped to achieve this.

It was always said about advertising that it was a people business. What that really meant was an ego-driven business in which you either bought into a single-minded vision or you didn’t. While direct marketing has never been as reliant on one person’s view, it has still had its share of famous names. The irony is that just as the agencies sporting those names have come back into fashion, the real success stories are coming from a team spirit.

Market Management Services interviewed a sample of 301 respondents chosen from Marketing Week‘s circulation list. To be eligible for inclusion in the survey, respondents had to be marketers with responsibility for selecting or reviewing a direct marketing agency.
• Copies of the full survey are available at £95 including postage and packaging, from Marva Hudson on 020 7970 6301 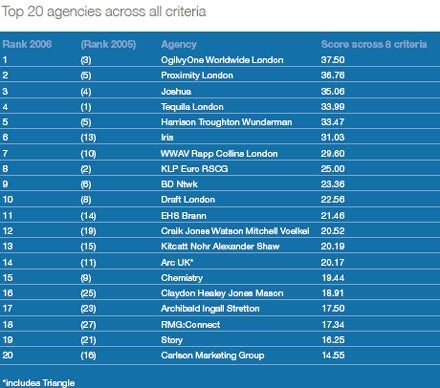 Name: Jonathan Massey Company: Pensions Management Job title: Head of Graphic Design What keeps you busy all day? My team look after design jobs from concept to production, including a wide range of products such as magazines, leaflets,…

The UK is several years ahead of the US in the race to develop internet advertising, according to Yahoo! chairman and chief executive officer Terry Semel. Speaking at the Internet Advertising Bureau’s (IAB) Engage conference yesterday (Tuesday),…

Vodafone has signed a mobile advertising deal with Yahoo! UK that will see consumers receive ads on their mobile phones in exchange for cheaper bills. The news comes as Vodafone reports losses of £3.3bn for the half year to the end of September. The mobile giant announced its intention to launch a mobile advertising service […]