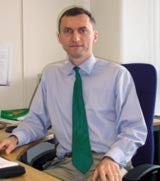 The National Archives, which looks after Britain’s historical documents, has recruited James Strachan, former director of media products at mobile phone company 3, as its first head of online services and strategic marketing.

The organisation has an award-winning digital archive and a website targeting consumers interested in researching family, local and national history. Genealogy and family history have become big business in recent years, as the internet has made it easier for amateur historians to gain access to records in the UK and abroad.

Strachan – who has also worked for Philips, Chambers and Encyclopaedia Britannica, where he was European managing director – says: “Research shows up to 75 per cent of the UK population is interested in history, and we are looking at developing products that appeal to more than the traditional family history market.” He will also be looking to create marketing partnerships with internet service providers and website owners.

In addition to its consumer- facing website, the National Archives has been actively developing services for business users, including advice on best practice in document and information storage and management.

The National Archives, based in Kew, south-west London, was formed in April 2003 by the merger of the Public Records Office and the Historical Manuscripts Commission. It looks after government and court documents dating from the 11th century – including the Domesday Book – through to the latest declassified Cabinet records. It also maintains the National Register of Archives and the Manorial Documents Database, which provide information on how and where to find non-government records.