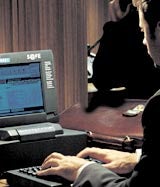 On an average day in the UK, until about 4pm, patterns of Internet and TV use are similar, with some evidence that as one increases the other decreases slightly. However, after 4pm Internet usage dips and TV viewing really takes off.

The TGI Europa Internet 2000 report by BMRB, which looks at top-line data and basic demographics, builds a picture of Internet users having a diverse media diet, reflecting their busy lifestyle, mobility, wide-ranging interests and sociability.

The report looks at the UK, France, Germany and Spain and is based on a sample of 65,000 adults, of which over 13,000 are Internet users. This includes focusing on heavy and light users, people who shop online compared with those who do not, as well as home and work users.

BMRB divides Internet users into categories on the basis of point of access – such as home users compared with work users. Differences in usage can be noted in terms of frequency of access, the number of hours spent on the Internet and the number and popularity of activities online.

According to BMRB, year-on-year comparisons show that the greatest growth in Internet use is in Italy – with a 72 per cent increase in 2000. The UK, where the overall penetration is the highest, has had the lowest levels of increase from 1999 to 2000. At the same time, Internet use in the UK has grown by 23 per cent year on year in the same period.

The main factors influencing growth in Internet usage include the emergence of free Internet service providers (ISPs); declining telecoms charges; level of education (and presence of PCs in schools); Internet access in the workplace; presence of a PC in the home; and viable existing alternative sources (for instance Minitel in France).

The research corroborates the widely held view that the age of Internet users is strongly biased towards those aged under 45 years old, in all countries. In general, over two-thirds of all users are under 45, although this proportion is even higher in Italy and Spain (85 per cent and 80 per cent respectively). In Germany, the year-on-year increase in female users lags behind their male counterparts.

A comparison with 1999 TGI Europa data shows that the age profile of Internet users has altered only slightly. In all countries except Germany there has been an increased proportion of older (55-plus) users – although older users are still very much in the minority as a whole.

Comparing heavy and light users and their relationship with new technologies, it becomes clear that prolific Internet users (those spending 20 hours or more a month online) are driving acquisition in new technology markets. The profile of such heavy users strongly matches that of the early technology adopter – who is predominantly male, under 45, affluent and well educated.

The personal electronic organiser is an emerging Internet platform competing with the conventional PC. The PC is also having to compete with the likes of mobile phones, digital TV platforms plus set-top boxes, games consoles and Internet kiosks.

The TGI survey says that online shoppers are much more likely to agree with statements such as “I love to buy new gadgets and appliances”, while focusing on new technologies. This may explain why software and hardware tend to be among the top five items and services bought on the Internet.

The analysis of Internet consumers’ attitudes indicates that online shoppers in all the European countries are happy to pay extra for good quality and will also treat themselves to items they do not really need. This is one common feature among all Internet users but stronger among online shoppers.

The research asks what Internet users are doing when they are not accessing the Internet and, more specifically, is the Internet having an impact on the levels of consumption of other media? Using the TGI Europa time diary, BMRB says that it is possible to track Internet use across any day of the week.

In the UK, Internet use is at a steady peak from 7pm to 11pm, whereas the TV viewing peak drops dramatically after 10pm. It is true that Internet usage levels are far lower than those of TV, however the competition for attracting audiences in the evening between Internet and TV is likely to intensify and this is chiefly because of the availability of Internet access via the TV.