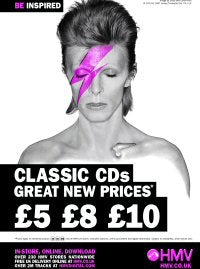 High street entertainment retailers are finally fighting back against the double threat of supermarkets selling cut-price CDs and DVDs and the rapidly growing online market.

As supermarkets turn top-selling entertainment products into just another commodity bought on price, the entertainment specialists such as HMV and Virgin Megastores are attempting to inject fresh passion into the purchasing of music and film.

But some observers believe that the measures being put in place by HMV and Virgin Megastores will fail to secure their future.

HMV, the UK’s leading entertainment retailer, with over 220 stores and about a 25% share of music sales, has launched a dual strategy of cutting prices and attempting to reconnect with shoppers on an emotional level. It has priced back-catalogue CDs at 5, 8 and 10, far simpler than the previous complex web of prices. According to figures released last week, this seems to have helped slow the decline in like-for-like sales from the high of 16% reached in the first two months of this year.

A New Top Dog
Other changes include hiring a new chief executive for HMV Group – Comet chief Simon Fox – to replace Alan Giles who leaves after nine years. The retailer has also relaunched its digital download service and stepped up the mail-order business.

But the biggest shift for HMV is its realisation that it can make greater use of its powerful brand heritage to carve out a place in the rapidly transforming entertainment market.

Marketing director Graham Sim, hired almost a year ago from Monsoon Accessorize, has launched a soft-focus branding campaign through agency Quiet Storm called “Be inspired”, which seeks to show that there is more to music than just price. It features stars such as Elton John and David Bowie choosing songs that inspired them.

Meanwhile, HMV’s high street rival Virgin Retail, which operates the 128-strong chain of Virgin Megastores, is facing a fine after failing to file accounts for 2004/5 at Companies House by this April. Its last accounts for the 14 months to the end of March 2004 showed losses of nearly 70m, on sales of 376m. Virgin put in place a recovery plan that included closing down many of its smaller outlets.

A spokesman for Virgin Retail says the Megastores had strong sales last Christmas, growing over 3% like for like. The chain has also introduced price cuts in September and is launching a new store format in November at a site in Manchester’s Arndale Centre. It is changing its download service so it can operate direct from a browser rather than users having to download a player.

But some observers are sceptical that such moves by the high street chains will lead to a long-term recovery, or that they will be able to fight off the encroachments of the supermarkets and digital downloading.

As Mintel director of retail research Richard Perks says/ “I think it is pretty bleak. The future for any retailer is to integrate the high street and online services, cross-promote and make the two work together. But whether that is viable for music retailers given the growth of downloading, I’m not sure.”

He believes the high street music and film retailers have been particularly weak in adapting to the new realities, adding: “It is fair to say HMV has mismanaged how it reacted to the growth of online. It failed to see what was happening soon enough. Virgin wasn’t much better.”

Down the Scale
Verdict Research senior retail analyst Alastair Lockhart is not quite as pessimistic, but says: “HMV is a business that has turned the corner, but it really does face big issues because it is highly exposed to music and video. It will grow, but much slower than it has done.” He stresses that the market is tough – retail sales of music and film in the UK will be worth about 4.4bn this year, a decline on last year.

An HMV spokesman argues that its future lies in building its brand so it can operate across different channels: on the Web, the high street or through mail-order. The stores themselves need to be made more interesting, he admits.

Quiet Storm strategy director Jon Howard-Spink sums up the challenge: “How does it move from being a retailer of entertainment to being an entertainer in its own right?” HMV has admitted it made mistakes in the past and concedes it was slow to catch up with key changes in the industry. In 2005/6, sales in the UK and Ireland music chain fell 5% to 937m, and operating profits plummeted by one-third to 60m. At last week’s annual general meeting, HMV revealed that like-for-like sales for music fell 5.4% at the music stores in the 12 weeks to September 23, an improvement on earlier declines. However, the price cuts to both chart and back-catalogue CDs had caused a 250 basis point decline in gross margins.

In spite of this it should be remembered that the threat from supermarkets is only on top-selling titles, leaving the specialists to concentrate on their wide ranges. And the threat from internet sales needs to be kept in perspective. Downloaded music accounted for at most 5% of the 2bn music retailing market in 2005. One estimate suggests that 90% of tracks carried on iPods are side-loaded from CDs rather than downloaded from the iTunes Store.

Richer Sounds
Meanwhile online sales of CDs grew to 11% last year, from 9% the year before, and DVD online sales hit nearly 14%. The figures are increasing, but do not yet spell disaster.

A growing force on the high street is Music Zone, which last year bought 43 stores from MVC, previously owned by Woolworths. Music Zone now has 107 stores across the UK and next year plans to open a further 25. Commercial director Eren Ozagir plays down the threat from supermarket price-cutting and believes there is only so long entertainment products will be used as loss leaders. “The supermarkets are starting to fight within themselves. They are feeling the heat from their own reductions in price and have got to make it make money at some point,” he says.

The crunch will come this Christmas when the result of the various strategies will become apparent. The problem for the specialists is that brand power lies in the hands of the artists. The retailers have already been forced to respond to supermarkets by making their own price cuts. Alongside their declining margins, they need to spend heavily in turning their stores into exciting destinations for entertainment.