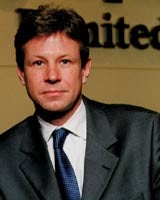 Amid much talk of “setting aside old rivalries” and discussion of which model to follow, the birth of the Newspaper Marketing Agency (NMA) as a central promotional body for national newspapers has been greeted with generally welcoming responses. No one has been more welcoming than those of us whose research will soon have the chance to benefit from a new platform.

Research is undoubtedly going to be at the hub of NMA activity, but it could also be the proving ground upon which the NMA shows that old rivalries really can be set aside in the name of commercial progress. One of the difficulties the industry has faced is that the vast majority of newspaper research to date has been bespoke and confidential. Now, we have the chance to put our heads together and look at the potential for pooling and merchandising selected data without betraying client confidentiality. This could be the ultimate test of competitors’ ability to work together.

Let’s not forget that the notion of competitors working together is what makes the NMA fundamentally different to the other models we have been urged to follow. That oft-quoted example, the Radio Advertising Bureau, presents much to admire but, unlike the NMA, it is not made up wholly of members competing directly with each other. Hence the NMA has been a while in coming, but for us researchers in particular its arrival is all the more welcome. At the very least it should soon start to correct a frequently voiced misconception that newspapers do little, if any, research on advertisers’ campaigns.

Such perceptions are clearly some years out of date, as the NMA will be able to launch with an abundance of research riches already at its disposal, with which to build a compelling case for the medium. The Daily Telegraph, for instance, conducted more than 50 separate research projects during 2001 and I believe that my opposite numbers at other papers are sitting on similar banks of knowledge and insight into their readership. Together, we will be more than a match for any medium.

One hurdle will remain, however: that of ensuring that our research is actually used and acted upon. My own company’s sections research is a good case in point. Agencies were, rightly, vocal in calling for the deficiencies of the National Readership Survey to be made good. But, after three years of producing research that shows which people read which sections, rather than just the paper as a whole, the Telegraph Group gets few requests for the information – let alone revised buying plans.

Perhaps there will always be a degree of doubt, cynicism or even confusion over proprietary research. The NMA, however, gives us the chance to rise to the opportunity and to encourage advertisers to see and appreciate our research in a new light.