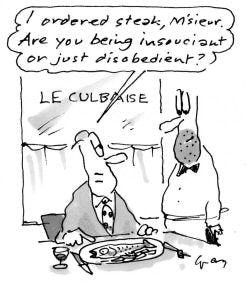 Faced with Puritanism and petty authority, there are signs that the British are taking a leaf out of the French’s book and learning how to get stroppy.

In matters concerning the French, we English are apt to adopt a quiet reserve, commenting, if we must, merely on their untrustworthy nature and proclivity to eat creatures from lower down the food chain than nature intended.

But in taking a disdainful view of our Gallic neighbours, we do them an injustice. They have many admirable qualities, or one at any rate. Scratch a Frenchman and you will find, not far below the surface, a truculent revolutionary.

Put upon by meddlesome or petty authority, he will respond in one of two ways, each as effective as the other. Either he will carry on regardless, and do so moreover with a blithe insouciance, or he will wave his arms, take to the streets and set light to things. To which authority in its turn will respond, but in one way only – it will give in.

How feeble and supine we English are by comparison. To each new infringement of our liberty we meekly succumb, and to each new imposition we yield. It’s almost as though we secretly yearned to return to the comforting serfdom of our medieval forebears.

The French hark back only as far as those of their forebears who rose up and forged the Republic in blood and gore. Nor is that memory lost on today’s ruling class. Should a fonctionnaire be tempted to get above himself, he need only recall that, if irked, the sans-culottes are apt to parade up and down the Champs Elysées with his head on a spike. That memory inclines French officialdom to take a generous and expansive view of popular dissent.

We, by contrast, had a Glorious Revolution in which no one got hurt, which might explain our curiously bloodless approach to life’s challenges.

But, whisper it if you dare, change is afoot. There are signs that the worm, if not actually turning, is giving it some serious thought and, if further provoked, might not be responsible for the consequences.

First comes the cheering news that sales of cigarettes in Scotland have fully recovered from the ban of smoking in pubs and restaurants introduced in March, prompting Imperial Tobacco’s chief executive Gareth Davis to predict a similar outcome when the ban is introduced in England and Wales next year. “If people want to continue smoking,” he says, “they do it, but in a different place.”

Next comes Burger King’s defiant promotion of a giant hamburger said to contain so many calories that a grown man would need to walk nine miles to burn them up. Ads for The Double Whopper with Cheese target the supersize burger at men fed-up with healthy “chick food”.

“Customer research has identified there are plenty of men who enjoy indulging in a quality burger,” says a spokesman with what sounds very like insouciance.

The arrival of this calorific delicacy comes in the wake of amusing stories that the country’s youth are rising up in cheerful rebellion against the so-called “Jamie Oliver effect” – the introduction of fruit, vegetables and fibre into school meals at the expense of the traditional fat-laden favourites that make our children what they are.

Now before my more priggish readers, of whom there can be but one or two, rise up spluttering and fulminating, let me say that I do not advocate smoking; in fact I find it a distasteful habit. Nor would I eat a Double Whopper, with or without cheese, even if paid to do so, and I, too, share the blend of wonder and revulsion that tomorrow’s generation arouses in the onlooker.

It is not to defend bad and unpleasant habits that I write, but rather to express a loathing of those who, not being content merely to admonish sin where they see it, take it upon themselves to compel others to be good. Listen, if you will, to Richard Watts, a spokesman for a “food group” called Sustain. “Burger King’s response to the obesity crisis seems to be to bury its head in the sand, and continue to produce larger and larger burgers,” he says. So incensed is he by this heresy that he is reporting the company to the Advertising Standards Authority.

Given the climate of fear generated by the clamorous busybodies who infest public life, it is perhaps too much to hope that the ASA will send Mr Watts packing with a curt reminder that, during this brief interregnum between a free democratic Britain and the neo-Puritan Commonwealth, it is legal both to manufacture and sell burgers stuffed with enough calories to make your eyes bubble.

For my part I can but dream. I do not know what Mr Watts’s head looks like, but I cannot suppress the thought that it would be improved on a spike.•

Mobile network 3 is to launch a new mobile internet package, backed by a string of high-profile Web companies. Called X-Series, the package will allow customers to make unlimited calls from their mobile using Web telephony provider Skype and watch their home television on their mobile phone in a tie-up with Sling Media. They will […]

Ofcom has rapped Channel 4 for promoting its 4homes magazine during its property and lifestyle programming. The broadcast regulator investigated the channel following a complaint from trade group Producers’ Alliance for Cinema and Television (Pact) that the magazine was being promoted around shows such as Relocation, Relocation, Relocation and The F Word across Channel 4 […]

Walt Disney is creating a new games studio to make titles exclusively for Nintendo games systems. It will include the Wii console (pictured), which launches in the UK next month. The new studio is called Fall Line and will sit within Disney’s Buena Vista Games division. It will develop games based on existing Disney characters […]