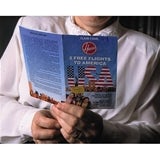 Following your article”Tied up in knots” (MW June 22), I would like to draw your attention to the fact that not only did Hoover disregard professional advice from the sales promotion industry, but it went on to ignore advice from the promotional risk management industry – which protects promoters against the financial risk of over-redemption – too.

Having been in the latter industry since 1984, Hoover approached me, along with a couple of promotional risk management companies. I advised it of the potential pitfalls of the promotion. Having looked at the details, along with attempting to calculate how it could actually work, I declined to offer risk management coverage. Such a high value offer for only a relatively small cost to the consumer made no logical sense to me.

I estimated that the cost of fulfilling the promotion could be at least &20m, which we believed to be about right, but we understand it went on to incur costs of over &40m. As the promotion was riddled with problems from the outset, the consequences for Hoover were destined to escalate out of control. For example, the press became aware of the activity and succeeded in raising even greater awareness of the promotional blunder.

PIMS-SCA was not the only company to hold this view, but Hoover chose to completely ignore both my – and the industry’s – advice.