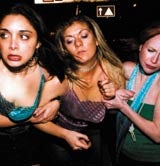 The Portman Group launches a cinema advertising campaign across the UK today (Wednesday) to highlight the dangers of binge drinking among women. Created by London-based agency Iodine Media, the ad highlights the ‘Jekyll and Hyde’ effect of drinking alcohol. It shows the actions of a young woman at work during the week with her behaviour when she is out with friends at the weekend. She is seen vomiting in nightclub toilets and ends up in the gutter holding onto her friends for support. The Portman Group chief executive Jean Coussins says the proportion of women aged 16 to 24 years old who drink more than 35 units a week has more than tripled from three per cent to ten per cent over the past 15 years. Earlier this year, The Portman Group worked with M&C Saatchi on a campaign to try to curb the level of binge drinking among young people.