Honda’s new marketing chief Jeff Dodds might be following in the footsteps of one of the car industry’s most high-profile marketers in Simon Thompson, but it is clear that he has no intention of living in the shadow of his predecessor.

Dodds is part of a new-look senior management team at Honda that has been taking shape since the start of the year. Ewan Ramsey joined from DaimlerChrysler as general manager of the car division in January (MW November 17), while BMW executive Bernard Bradley was appointed head of sales in July. Marketing communications manager Matthew Coombe is leaving at the end of this month to join Vodafone UK as head of brand (MW October 12) but Dodds insists that Honda’s communications strategy will remain constant despite the changes.

Consistency Despite Changes
“Our business is going through change with new people coming in and good people going out,” he says. “But our strategy to communicate on the basis of who we are, as opposed to what we do, has been in place since 1994, so our marketing will be consistent.”

A campaign due to break in December will be the first major activity for which Dodds is directly responsible. He promises it will be “spectacular, as you would expect” – but expectations are high.

“Cog”, the first of the marque’s four multi-award winning ads from Wieden & Kennedy (W&K), broke in 2003, showing a chain reaction involving 85 car parts. It took 606 takes to make and won Best TV Commercial of the Year at the British Television Advertising (BTA) Awards, as well as first prize at the US Clio Awards. Follow-up “Grrr”, the animated commercial for diesel cars, won the same BTA Award the following year and the Grand Prix at Cannes, while “Impossible Dream”, the brand ad featuring past and present Honda products, won the company a third consecutive BTA gong in March this year. Both Impossible Dream and “Choir” also won gold Lions at Cannes this year.

Honda manager of customer communications Ian Armstrong, who worked with Thompson and now reports to Dodds, thinks the company is a victim of its own success: “If we produce a good ad, everyone says they expected it. If not, they say we’re going off the boil. That’s quite a weight to carry.”

One possible change the new management team may look to implement is a move upmarket. Dodds says Honda has aspirations to compete in the quality premium sector and adds: “Over time, we aspire to be considered alongside BMW. We have premium people in our organisation so it’s no surprise that we’re positioning ourselves in a more premium space.”

Honda looks set to review its digital arrangements in the coming months as it prepares to ramp up its interactive spend. The company works with Midas at present and, although Dodds says no decision has been taken over whether to hold a pitch, he adds: “Next year will be the year of digital for Honda. We’re going to up our game and we want to become a world leader in digital.”

Honda axed communications planning agency Naked Communications from its roster in July. But observers believe the same decision would have been made by Thompson. Armstrong says: “The level of contribution we got from its founding partners diminished over time as they developed the business. The relationship changed.” 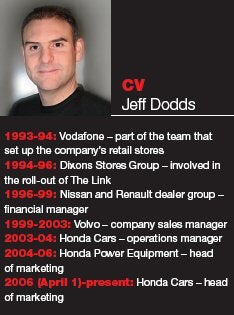 Challenging Roster Relations
The move led to speculation that Dodds was going to make further changes to its roster, which includes Starcom and direct marketing agency Hicklin Slade, as well as W&K. But he says: “We have to review that process and make sure we are getting value. That’s no different to any other organisation. We have an open, honest and challenging relationship with our agencies.”

Critics argue that it was an extension of Honda’s product line, rather than its advertising, that spurred sales to jump from 77,000 in 2002 to more than 98,000 last year. Like the rest of the car industry, Honda has struggled to replicate that success this year, but its sales are steady, down just 2.5% on last year at the end of September. This compared with an average industry decrease of just under 4%, and some manufacturers down more than 20%.

Dodds believes the automotive industry has been experiencing a false economy for a number of years. “The growth in the car industry was not natural growth,” he says. “The motor industry is one of the only industries where supply far outstrips demand. But we’re growing off the back of genuine consumer need. We do not force cars into the market.”

Independent Dimension
People who know Dodds say he is a strong character with a good business brain. One source who has worked with him in the past comments: “Jeff’s very much his own man and that can’t be said about everyone at Honda. Simon came along at the right time and rode the right wave but Jeff has the added dimension of a commercial mind. Maybe that’s something Honda was lacking.”

However, W&K managing director Neil Christie says it is a mistake to think Thompson was not business-focused: “It’s easy to characterise Simon as a maverick and Jeff as a businessman but I don’t think we’re going to start running 0% finance for three years, and have silver cars on windy roads in our ads.”

Thompson’s passion for creativity and the history of the Honda brand was palpable, but Dodds – a Liverpool FC fan and single-handicap golfer – talks a similarly good game. “The automotive industry has a very low creative ceiling so we benchmark ourselves against the likes of Apple,” he says. “Our vision is to be a company that society wants to exist.”

The campaign in December should indicate the direction Dodds wants to take the brand in. But only time will tell whether he can also continue Honda’s unprecedented sales success.